Home » The interiors of the Palace

The Halls of the Royal Palace of Caserta

Discover the splendid Royal Halls and the apartments of the kings

History of the Halls

The Halls for the Royal Family, were divided by Vanvitelli into four parts:

The lower right area was actually the only one to be inhabited by the Royal Family for more than half a century, as the rest of the construction was not completed due to the advent of the Neapolitan Republic and the Napoleonic domination.

The Theater and the Palatine Chapel were the only two rooms entirely built by Luigi Vanvitelli. From 1773, the year of his death, until the end of the century, the building site of Palazzo and Parco was directed by his son Carlo. On the death of Luigi Vanvitelli the construction of the Royal Palace of Caserta was completed in the architectural part, but Carlo had to face the decoration problem almost completely. Certainly he did not have from the new sovereigns the influence and protection that his father had from King Charles and Queen Maria Amalia, and in times of cutting of funds, Carlo Vanvitelli performed a true miracle in being able to continue the work given the impatience of the new rulers.

In 1780 the decoration of the apartment on the east side of the facade, originally intended for the royal princes, was almost completed and King Ferdinand I wanted to go and live there during his stays in Caserta, despite the continuing work in the antechambers, which they were not ready until around 1787. Subsequently the works continued in the Napoleonic era under King Joachim Murat with the architect Antonio dei Simone and then continued on the return of the Bourbons with Gaetano Genovese who, in 1845, finished the last room, that of the Throne .

The Royal Plan is, however, only one of the five floors of which the Royal Palace of Caserta is composed Royal Floor. From the “Declaration of the drawings of the Royal Palace of Caserta“

Walking through the Anterooms of the Halberdiers and Bodyguards, aimed at representative functions, lighted by great chandeliers of the nineteenth century gilt bronze and decorated terracotta floor faux marble, it will reach tothe Salon of Alexander, third anteroom designed to “non-Titled”, so named by the fresco of the vault of Mariano Rossi, representing the” Marriage of Alexander the Macedonian and the oriental princess Roxane”.

The Salon of Alexander (also known as “Marble Hall”), connects the XIX and the XVIII century halls. From here on the right leads to the New Apartment, also defined as the nineteenth century Apartment in reference to the historical period in which the works of furnishing and decoration were completed, while on the left leads to the Old Apartment or XIX century Apartment. Introduced by the two Anterooms of Mars and Astrea, richly decorated with neoclassical motifs and completed during the reign of Napoleon’s , the New Apartment continues with the Throne Room.

This hall, exceeded only in size to the Grand Ballroom planned by Luigi Vanvitelli in the Apartment of the Queen, was the last to be completed and was inaugurated on the occasion of the Congress of Sciences, in 1845. More than forty meters long and lighted by six windows, in the back of the hall there is a portable throne, in gilded wood, carved and upholstered in velvet. The decoration symbolizes the absolute power; the central painting of the vault, by the Neapolitan painter Gennaro Maldarelli, portrays “The laying of the foundation stone of the Palace January 20, 1752”. Through the Council Room, will enter in the Apartment designed for the King.

The XVIII-century wing of the Palace, lived by the Bourbon court since Ferdinand IV of Bourbon, welcomes the Old Apartment: Halls in elegant Rococo taste, enriched with sumptuous San Leucio silk wallpaper, coloured chandeliers of Murano glass and paintings of the most renowned artists of the XIX century. The tour begins with the so called Seasons’ Rooms, for the presence of frescoes on the vaults representing the four seasons portrayed by Fedele Fischetti and Antonio de Dominicis. Arouse considerable interest the halls of the Apartment of Queen Maria Carolina, decorated in the rocaille taste, very different from the rigor of the furnishings of King’s rooms. Worthy of note are the three halls of the Palatine Library, denoting a neoclassical style visible in the upper libraries boiseries or in so-called Pompeian decorations of Giustiniani vases exposed on the shelves.

The third hall of the Library leads to the Elliptic Room, spacious free of decorations hall, with original architectural solutions of the vault, elaborated to enhance the acoustics of the hall to its original use in home theatre. It now houses the Nativity in Bourbonic style.

The Palatine Library as part of the royal apartments,is an essential complement to the prestige of the Court. Occupies three large rooms of the apartment so-called “old”, furnished with beautiful libraries in walnut and mahogany. As the library collection was formed slowly through the decades, according to the influences and tastes of to the personal interests and culture, not to mention the many vicissitudes, the dismemberments that history has inflicted.

It owns about 14,000 books and booklets of various subjects, including the most important and prestigious ones,both for content and both for typography, printed in the XVII and XIX century. You can find the most significant works of European and Neapolitan culture of the modern era: of religious argument, such as the complete collection of the Catholic Library, treatises about law and economics, among which stands out those ones by Montesquieu, Filangieri, Vico and Giannone, and also the Collection of Laws of the Kingdom of the Two Sicilies; literary works of classical and modern authors of various nationalities, geography, mathematics, science, and zoology, the latter ones also interesting from the graphical point of view, such were printed by Bodoni with a lot of fine coloured etchings. An unique collection, rich and valuable, is made up of opera librettos, dance and music in general, which refers to the time given representations in the various theaters in Naples. Special mention goes to their ligatures, those rich in ornaments and decorations stamped in gold or enamel decorated in Moroccan ones, velvet and silk.

The tour continues in the rooms of the Art Gallery, rearranged to have regard to the paintings that document the cultural addresses and artistic choices for the patronage of Bourbons and, before that, the Farnese. The royal portraiture is thus joined to genre painting with scenes of court life, popular scenes and with allegories extolling the virtues of the sovereigns. In the wing of the Pinacoteca, intended for landscape painting, are exhibited the “Views of the ports of the Kingdom” by Jacob Philipp Hackert together with other paintings by the XIX and nineteenth centuries including Antonio Joli and Fergola. In the north wing houses the royal portraiture, from Farnese’s Fasti.

In the Royal Apartment there is the Elliptical Hall, painted in white and without decorations, and made for the amusement of the court. Today it houses the Bourbon Nativity, recently restored, after which most of the figures had been stolen. The tradition of the Neapolitan Nativity grew thanks to Charles of Bourbon during the half of the XVII century, but mostly thanks to the collector king Francesco I.

The habit to prepare for Christmas the nativity scene into the Royal Palace of Caserta, became a tradition of the whole Court: it was created not only by the artists and craftsmen, but also by all the ladie-in-waiting and princesses, skilful in making clothes for the shepherds, rich ladies or oriental dressed Georgian merchants, made with multicolored San Leucio’s silk and of filigree and coral jewelery.

Artists such as Bottiglieri, Sanmartino, Mosca, Celebrano, Vassallo, Gori participated in the creation of the nativity scene, modeling the most important figures in terracotta, while the others had only the head and limbs of terracotta and the structure of wire and tow. The figures were placed on a cork "rock", according to strict rules and respecting the canonical scenes, such as the Nativity, the Annunciation to the shepherds and the Osteria.

A project was carried out every year to create the crib, as described in the paintings by Salvatore Fergola visible on the walls of the room. They depict the last crib set up by the sovereigns, before the conquest of the Kingdom in 1860. The current setting is inspired by that last nineteenth-century crib, which well represents cosmopolitan Naples at the end of the eighteenth century. 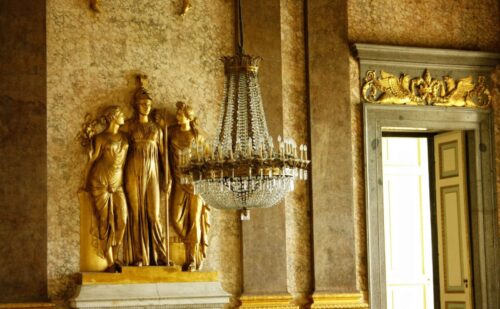 Would you like to see all of the Halls?

To explore all the Halls, you can currently go to the Italian version until the English pages are made