Home » Park - Index » The Fountains of the Palace of Caserta

The Fountains of the Royal Palace of Caserta

The fountains waterway crosses the second part of the Park, in the middle of an avenue which goes up to the surrounding hills thanks to a natural slope. The two lateral streets are lined with holm oaks characterized by a double height, in a typical form called “Chair-like”. The tree lines design a straight way up to the extreme geographical and perspective limit of the park that is Briano Mountain. Here there is a waterfall comes from the Caroline aqueduct, feeding the waterway.

The rectilinear canal shows a discontinuous and varied articulation, alternating big basins, little waterfalls and wide segments of grassland. This solution, together with the slope, creates an optical artiﬁce that makes the street seems shorter than its real length (around 3 km). This shows Vanvitelli’s scenographic capabilities to manipulate the perspective creating the effect of an illusionist place. The most evocative aspects of the waterway, apart from its wonderful landscape component, are the fountains, decorated with a very rich sculptural apparatus. The distance seems very short, but in fact is over 2km! The Vanvitelli’s optical illusions! Fountain of the Dolphins

The Fountain of the Dolphins represents the figure of a sea monster with the head of a dolphin, flanked by two smaller dolphins. The sculptures, in Bellona travertine, were made by Gaetano Salomone between 1776 and 1779. The drawing belongs (as per archive notes) to Carlo Vanvitelli, who re-elaborates those ones of his father.

The waterjets flow from the mouth of the sea monster and fall into a basin 470 meters long, 27 meters wide and 3 meters deep. In the background, a striped ashlar creates the naturalistic effect of the rocks in a game between the geometric and the natural. The fountain hides, under the tufaceous rocks, a cave that can be traveled with rest seats. In 1781 Ferdinand IV of Bourbon gave a big party lighting the avenues, from the Palace to the fountain. On the sides of the fountain there are artificial caves.

From the Fountain of the three dolphins, following the watercourse you arrive at the gigantic Fountain of Aeolus which has a width of about 80 meters, 4 times larger than the Trevi Fountain in Rome! It represents the god of the winds, Aeolus, who, urged by the goddess Juno, unleashes the fury of the winds against Aeneas and the Trojans. The statues were made by Gaetano Salomone, Brunelli, Violani, Persico and Solari. It is adorned with 28 statues instead of the 54 ones of the original project.

It is one of the unfinished works of the park: the project, of which only a wooden model prepared by Vanvitelli himself remains, included a large sculptural group of Aeolus and Juno on a chariot pulled by peacocks, but was never completed. The sculptures of Juno and the peacocks are currently at the entrance to the Superintendency offices.

Similarly in the basin of the fountain, which represents the sea of ​​the Aeolian islands, three islands were to be created to represent the Sicilian mountains Peloro, Pachino and Lilibeo. Of the three planned, only the first two were made statuary-free. Originally the statues were "leaped out of water", through a lead pipe and poured into the tub below to create stormy sea waves. A waterfall falls from the top of the spectacular arched hemicycle that surrounds the fountain.

Unfortunately, during the Second World War it was heavily damaged, as it was used as a target by soldiers who enjoyed shooting at the sculptures. Side view of the Aeolus Fountain. The statues were used as targets by soldiers during the Second World War The Aeolus Fountain has enormous dimensions, it is about 80 meters wide, 4 times bigger than the Trevi Fountain in Rome! Notice how tiny the people appear next to the last “cave” on the right!

The fountain depicts Ceres, goddess of the fertility of the fields, surrounded by nymphs, cupids, couples of tritons and two dolphins playing the bugle. The goddess maintains the medallion of Trinacria and on either side are represented in the form of male deities, the two Sicilians’ rivers Anapo (the old Alfeo) and the Arethusa, the nymph of Diana transformed into a source to escape the love of Alpheus, who wanted to transform himself in a river to reach his beloved.

Originally Ceres had his head adorned with ears of wheat, while the Nereids were holding the ears of bronze, which were removed during the French occupation. The magnificent sculptural composition has a triangular shape,and was made between 1783 and 1785 by Gaetano Salomone using Carrara marble and travertine.

View of the Ceres Fountain with the waterfall in the background Fountain of Venus and Adonis

The group of sculptures adorning this fountain, represents the scene when Venus in vain imploring Adonis to don’t go hunting,and to be careful of the savage animals like lions and wild boars, to avoid him his tragic fate. Around the young man, dogs are joyful for the coming hunt, while hiding on a rock there is a wild boar that after will mortally wound Adonis. A crowd of nymphs and cupids shares the despair of the goddess,who rushed to Adonis’s help. This group, both mild and lively, was made by Gaetano Salomone with Carrara marble. The waterfalls and the waterjets of the Fountain 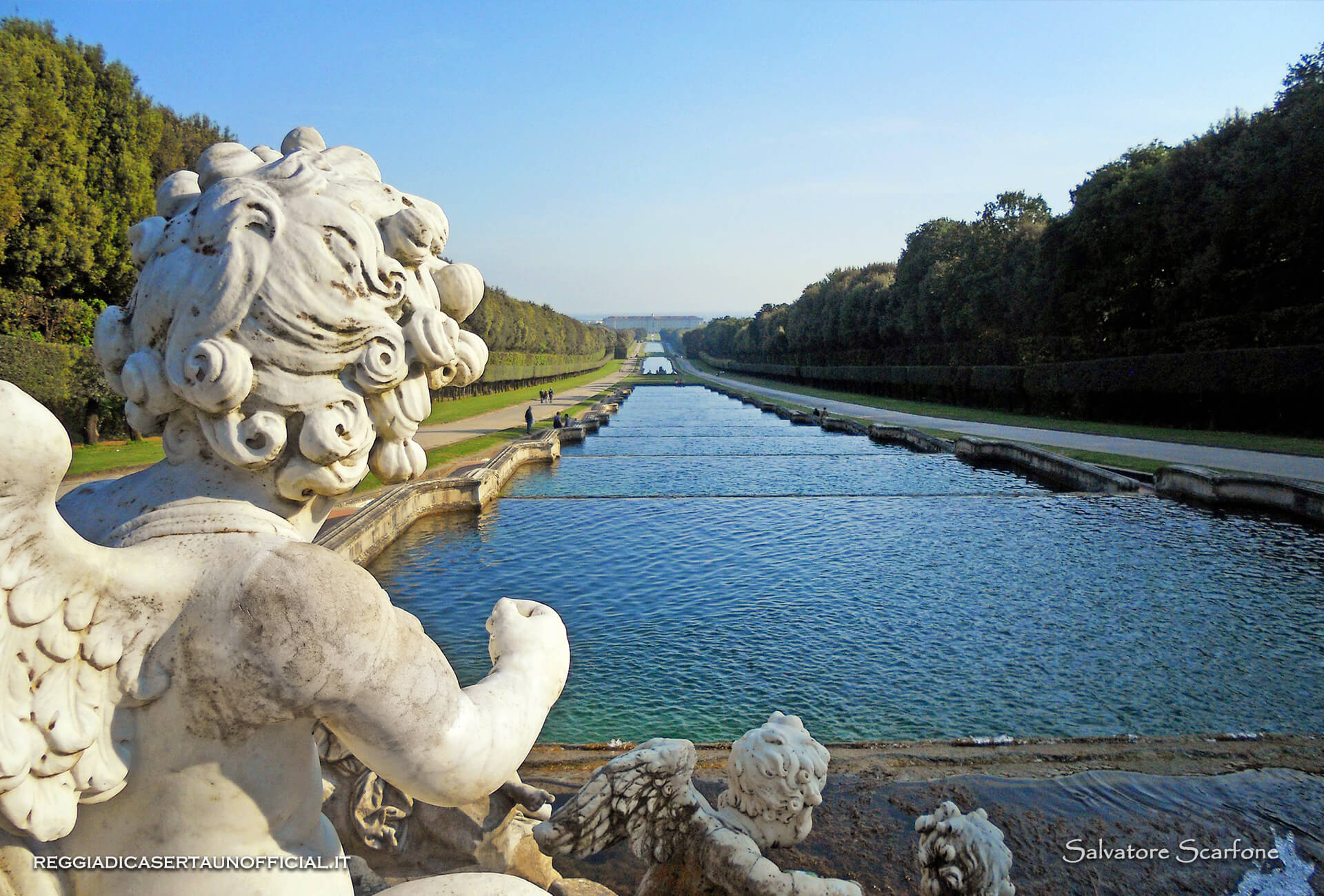 Fountain of Diana and Actaeon with the waterfall

At the end of the park dominated by the Great Waterfall (is 82m high), there is a large basin adorned with the famous group of Diana and Actaeon, sculpted by Paolo Persico, Pietro Solari and Angelo Brunelli.On one side there is Diana,the goddess of the hunt and woods (in fact the area behind is San Silvestro’s oasis), surrounded by nymphs ready to dive into the water, on the other side there is Actaeon, who dared to look at Diana nudity, and because of this Diana is transforming him into a deer that after will be teared to pieces by his own dogs.

Among the sculptural groups loudly roars a great waterfall, as symbol of life and purification. The cult of Diana was very popular in the Caserta area, rich in forests and wild animals. To her, in fact, with the name of Tifatina,there was a dedicated temple won which ruins was built the basilica of Sant’Angelo in Formis. The fountain is made up of two sculptural groups, “Diana and the Nymphs” (in the foreground in the photo but on the right side in reality) and “Acteone mauled by the Dogs” in the distance (on the left side in reality) The tower at the top of the waterfall

At the both sides of the fountain of Diana and Acteon there are two stairs that will get you at the top of the waterfall,where you can find an artificial small cavern,designed by Vanvitelli to be used as gazebo and spectacular viewpoint on Caserta till Naples following the famous Vanvitelli‘s “telescope effect”. The top of the Waterfall View from the Tower, 3.3km away from the Royal Palace.

History of the Park

The synthesis of three centuries of landscape art

Over 3km of fountains

The collection of rare plants surrounded by masonic rituals

The Belvedere of San Leucio

Where women’s rights and socialism were born

The Oasis of San Silvestro

The ancient hunting forest of the king. A dip in nature and history