At the right side of the fountain of Diana and Acteon with the above waterfall, there is the English Garden.Made on request of the Queen Maria Carolina of Austria,wife of the King Ferdinando IV. The English Garden was realized by Carlo Vanvitelli and the English gardener John Andrew Graefer. The intention of Queen Maria Carolina, who invested his personal fortune in this building, the garden of Caserta have to stand comparison and to overshadow the Petit Trianon at Versailles, commissioned by her sister Marie Antoinette of France.

This Garden was the first italian landscape garden, occupy an area of 24 hectares,and the works started on 1785 and were completed very quickly. The water that supply this garden is taken from the Carolino Aqueduct. Here almost everything is man-made, hills, meadows, ponds and canals,etc, and the plants were imported from all over the known world. Keeping up with fashion that from England was spreading across Europe,were built numerous Fabriques useful to the stop and leisure of royal people, but also orangeries and greenhouses intended for the accommodation of botanical specimens and to study botanic. During the XIX century, under the guidance of the botanists Giovanni Gussone and Achille Terracciano, the garden was called the "Royal Botanical Gardens" of Caserta. Here, in fact, are currently visible exceptional examples of Cinnamomum Camphora, Taxus baccata, Cedrus Libani and the first camellia ever arrived in Europe from Japan. 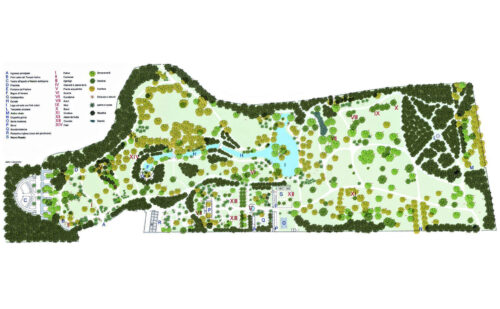 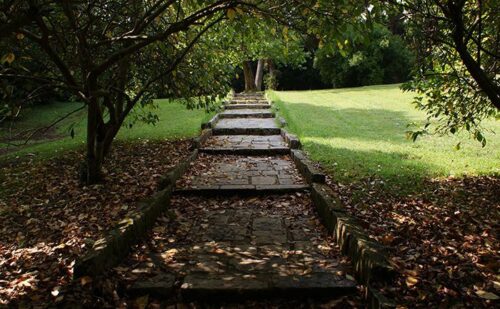 What may appear like a decorative element, often in reality it was part of Masonic initiation rituals. 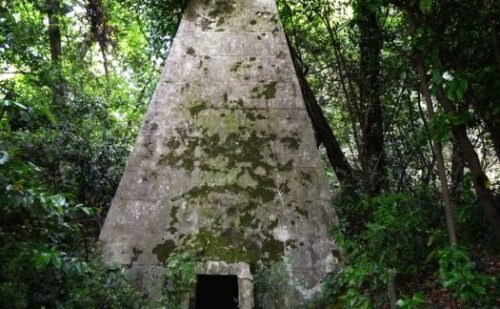 The lakes and the Temples

In the grove called "Labyrinth", made by Carlo Vanvitelli, there is a lily pond that expands to contain two islands, rich in vegetation, romantic representation of the nineteenth-century taste: the largest one has a small temple in ruins, with columns of granite and dolomite, taken from the ruins of Pompeii; the smallest one has a sort of pavilion used for keeping of ducks, swans and other water birds that live in the lake. 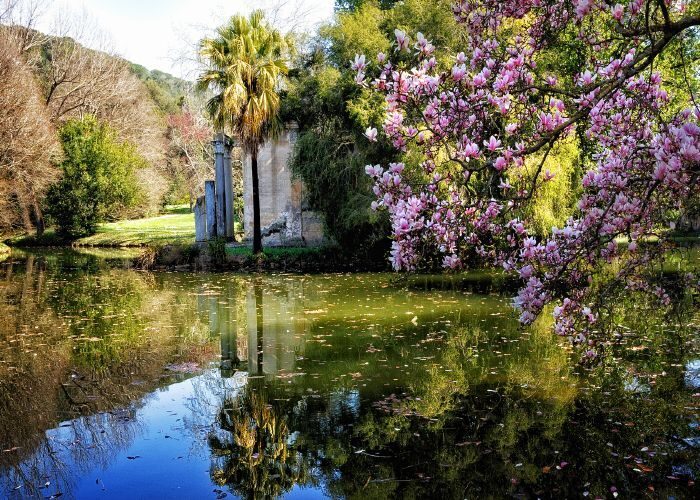 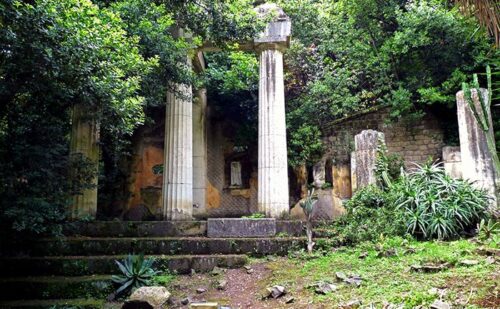 A place full of romantic charm, the Cryptoporticus is a false Roman ruin, built shortly after the discovery of Pompeii. It was purposely built as a ruin, to give to the guests of the Court the feeling of walking into the Roman town recently discovered and being excavated. To make guests feel "like Indiana Jones" we would say today.

The structure is a circular nymphaeum made of tufa, in which there are niches decorated with stucco Roman opus reticulatum, containing eleven statues, some of whom came from Pompeii, others from the Farnese collection, others already presents in place before 1792, the floor intentionally disjointed, is made of coloured marble tile. The vault was discovered in two points, while the fake wall has cracks and breakage. From the roots of a large yew grove, planted by Graefer, gushing water that feeds a beautiful lake, the Bath of Venus, where the goddess is portrayed as if it emerged from the waves, a statue in the "old", sculpted by Tommaso Solari in 1762, it was placed on one of the rocks that divide the waters in a thousand streams. In this area the vegetation is rich in ferns. 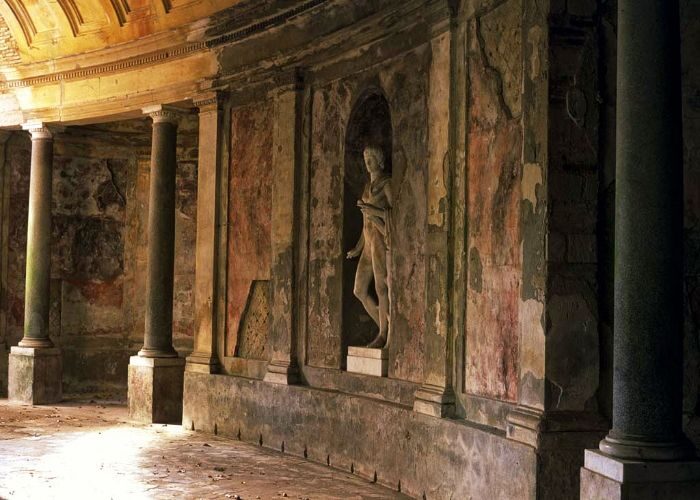 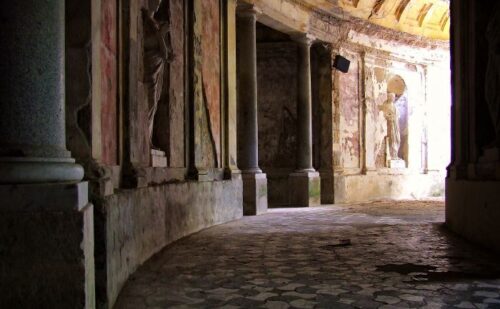 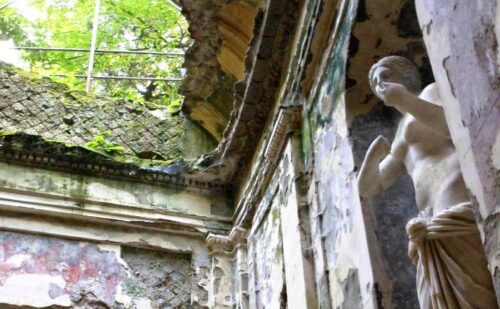 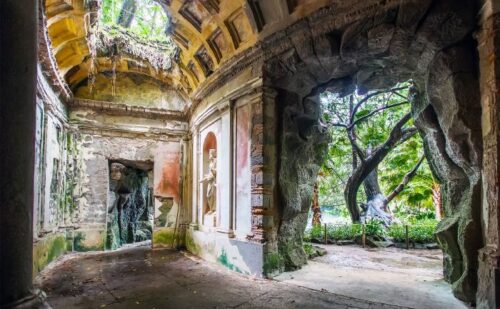 The Bath of Venus

One of the most captivating corners of the English Garden is undoubtedly the Bath of Venus, so called for the presence of a statue in Carrara marble,made by Tommaso Solari, depicting the goddess in the act of leaving the water of a small lake , surrounded by a forest of laurels, oaks and monumental specimens of Taxus Baccata.In the recesses of the lake made of precipices and nymphs inspired by the cavern of the Cumaean Sibyl described in the Aeneid, the sunlight penetrates through the foliage of trees, while you can hear the gurgling of the waterfall flowing from the bottom of the great yew located at the center of the hemicycle. 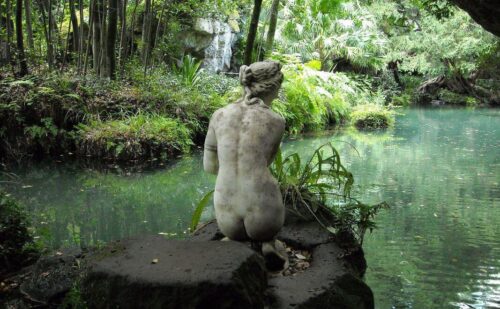 Not far from the old greenhouses, there is the English Mansion, built between 1790 and 1794 as home for the gardener John Andrew Graefer. It is a building with two floors, each one with twelve rooms, with the outside façade decorated with arches and doric pillars. The structure also provided a place for the storage of seeds and tools. Graefer continuously done excursions to Campania, Capri, Salento coast and the Sicilian city of Palermo to stock up on plants and, through contacts with the English botanists, was able to obtain many specimens and seeds from Australia, China and Japan, from which created hybrids and numerous rarities in the garden, that were not planted but kept in the greenhouses near the mansion.Near the greenhouses there is the Aquarium, a large circular tank designed to contain an aquatic plant. Nearby, there were also the School of Botany. 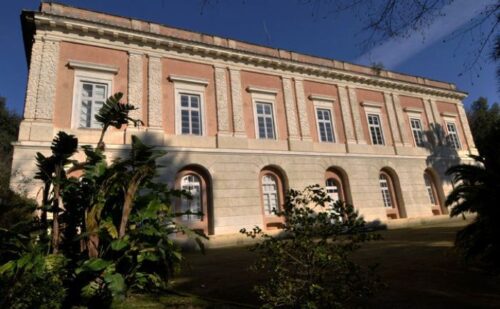 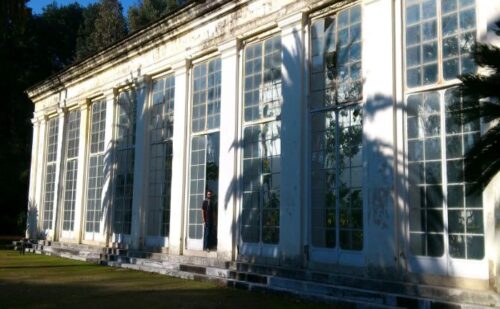 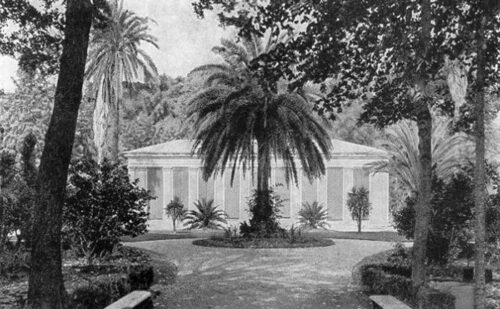 From the entrance of the English Garden, following the wide avenues on the left, there is a semi-circular structure built at the same time with the Palace. Luigi Vanvitelli (1700-1773) intended to use it as water tank basin in case of failure of the aqueduct, but because this never happened, in the French it was used period for the production of honey.
In 1828, the Aperia was used as greenhouse with artificially heated or cooled cultivations. The current neoclassical style of this building, enriched in the central niche with a statue of Ceres, belongs to this period. 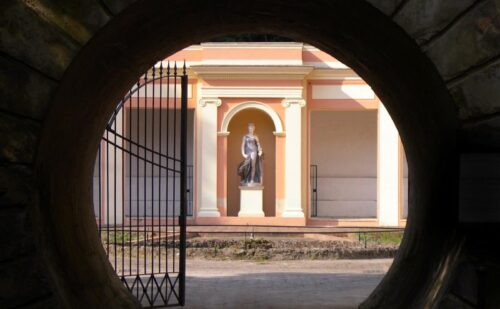