The Complex of the Saint Leucio Belvedere

What have in common Buckingham Palace, the american White House and italian government palaces the Quirinale and Palazzo Chigi? The Saint Leucio ’s silk.

The hill of Saint Leucio, located at the north-east of the Royal Palace of Caserta, was part of the fiefdom that Charles of Bourbon bought in 1750 from Gaetani di Sermoneta.
From the noble Mansion, built by the principles Acquaviva in the sixteenth century, on the hillside facing the plain, the aim was to obtain a “beautiful view”, hence the name of “Belvedere of Saint Leucio”. The Bourbons transformed it a place of “Royal Delights”, for fun and entertainment, while also enhancing its agricultural side. Charles of Bourbon used the woods for hunting wild boar. His successor, Ferdinand IV ordered the construction of a small building for the refreshment during the hunt, in the western part of the forest (Saint Silvestro), but abandoned it because it continuously remind him of the death of Prince Charles Titus, of only three years old.

After the tragic event, the King decided to renovate the Mansion Acquaviva. It was renovated under the direction of architect Francesco Collecini (1723-1804) and transformed into the Real Mansion of Belvedere.

In Saint Leucio Ferdinando IV created one of the most prestigious royal factories, specialized in the production of silk. To adjust the life of the local community, in 1789, promulgated “The laws pel Good Government Population of Saint Leucio.” Thus was born an industrial colony of weavers, self and community, is directly dependent on the king, and governed by a special statute. A social experiment, considered by many as an example of utopian socialism ahead of its time, which assured the inhabitants of the colony work, education, health and social care for orphans, widows and the disabled.

The Mansion of Belvedere is now home to the “Museum of the Silk Road”, where you can view the restored and working antique looms, the cuculliera for the storage and preparation of silk cocoons and silk mill; on the ground floor, the two big twisting, rebuilt on the old existing designs. Of particular interest are the Neighborhoods of Saint Fernando and Saint Carlo where they were located accommodation of those who worked at the royal manufactory.

The complex with the Belvedere, the silk factory and the workers’ district 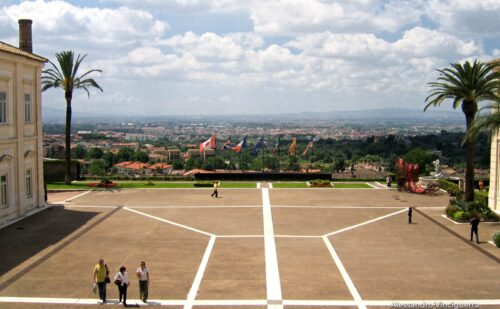 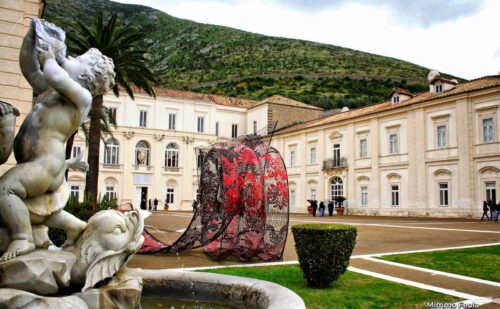 The back of the Belvedere 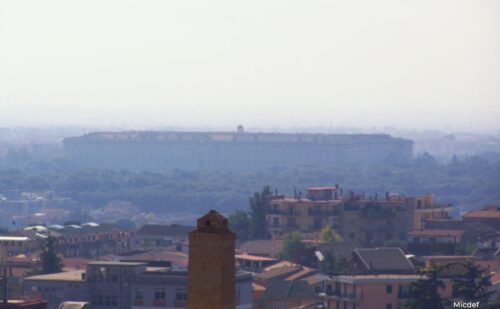 The Palace seen from the Belvedere

THE ROYAL MANSION OF THE BELVEDERE OF SAint LEUCIO

Built in the second half of the sixteenth century, probably by the lord of Caserta Andrea Matteo Acquaviva (1572-1634), during the first half of the eighteenth century, the building of Belvedere was in a state of neglect. With the first maintenance, carried out in the seventies of the eighteenth century, the building was used as accommodation for the keepers of the forest and the gamekeeper.
In 1776 the great “party room” was transformed into a church dedicated to St. Ferdinand King Ferdinand IV of Bourbon and subsequently commissioned architect Francesco Collecini (1723-1804), a student and former aide Luigi Vanvitelli, the expansion of ‘entire building to house a factory silky.

The old Casino becomes the central part of a large rectangular building with an inner courtyard including, in addition to the Royal Apartments, the houses for the teachers and directors of the factory, a normal school, and in the upstream side, a “regular room for spinning mill “- built in 1793 – a winder, a spinning accessories and other local manufacturing. The industrial site itself became a symbol of royal power.

Many of the artists already engaged in the decorations of the apartments of the Royal Palace of Caserta also worked in Saint Leucio: the case of Fedele Fischetti (1732-1792), author of the frescoes in the large dining room; Carlo Brunelli (XVIII cent.), Author of the paintings in the church of Saint Ferdinando King and JP Hackert (1737-1807), to whom Ferdinand IV entrusted the choice of furnishings and decorations of the ancient “Bagno Maria Carolina” , spa environment with sunken tub steam bath and hot water is supplied by a heater placed in the space below.

But the extraordinary and unique fact of this palace, is the that in the same building there were also the factories, and so the king was in close contact with the workers.

THE UTOPIAN CITY OF FERDINANDOPOLI

The project for the development of Building the Silk goes directly connected to complex and ambitious urban development plan promoted by Ferdinand IV with the creation of Ferdinandopoli.
This program, which corresponded to a precise plan provided for the enlargement of social experimentation and production of the Colony of Saint Leucio, and its expansion at the regional level, foreshadowing the Ferdinandopoli envisioned a real working great city gravitating around all ‘silk industry. Had its center in a large circular square from which a radius departed all roads in the north had planned a cathedral, and on the other side, the theater.

Perpetrator of the plan is Francesco Collecini that, after the death of Vanvitelli, and the departure of the Fugue, remains, together with Carlo Vanvitelli, the architect and the most authoritative figure in the Neapolitan govern. However, diversity training, interests and application of personality between the two will do according to the official architect of the Court. The Collecini, however, provided with a considerable body of knowledge and techniques of preparing a mold more ingegneresco, will become the trusted designer of Ferdinand IV as experienced and responsible staff of all private initiatives of the sovereign, as the agricultural colony of Carditello and precisely, Saint Leucio.

The Stature of Saint Leucio

In 1789 is born the  woman’s rights and the gender equality. This code nullified millenary habits and injustices, because now the woman on the legal, administrative and family areas was declared equal to man. It was no longer considered a “bargaining chip”, and therefore had no longer any need to have a dowry to get married.

This code was created at the behest of Queen Maria Carolina, although it is incorrectly attributed to King Ferdinand IV, only because this statute, like any other law, has written the signature of the king. This statute initially spread in a few copies, soon had wide spread even in the United States, due to its absolute revolutionary nature.

Nevertheless, the post-unification history, described King Ferdinand as a “loafer” and Maria Carolina as “bloodthirsty“.

Rationality of project and simple shapes characterize the village of Saint Leucio. These criteria allowed citizens to felt part of a community of equals and at the same time the protagonists of work processes, living in harmony with the environment in the districts of Saint Ferdinando and Saint Carlo(St.Charles), whose names are to be those of the royal couple, Ferdinando and Caroline (Caroline celebrated her name-day during the Saint Charles’day).
The construction of housing in the neighborhoods began in 1786. Arranged on either side of the gateway to the village, housed a total of 37 family units and were based on the repetition of square modules. The house was dividedon three levels:

The Unification of Italy and the end

The idealism of Saint Leucio lasted perfectly for many years, although with time it was eroded by the Napoleonic invasions and by strong population growth. The utopia of Saint Leucio not ended, as argued by the maliciously legend told by the Liberals, due of the sovereign relations with the female workers. It ended when in 1860, after the invasion of Savoy, the Kingdom was annexed to Piedmont: the silk factory was given to private, and the Statute became waste paper.

THE MUSEUM OF SILK

Neverthless The heritage of king Ferdinand and queen Maria Carolina still survives today in the local silk and textile factories, which still works with elite foreign clients as the Buckingham Palace, the White House, the Quirinale Palace and the Palazzo Chigi, in addition to producing fabrics, clothing, accessories and props prof privates that you can buy in the local manufactories in Saint Leucio.