Home » History of the Palace and of the Bourbon

The Kingdom of the Two Sicilies

Was the Kingdom of the Two Sicilies, the richest of the peninsula, really retrograde or was it maligned to justify the pre-unification attack?

The dynasty of the Bourbons of Naples and the two Sicilies on Southern ruled since 1734 to 1861.

Charles is usually considered the first King of Naples from the Bourbon family. He was the great restorer of the Kingdom, but the first king of that dynasty who reigned over the South of Italy was his father Philip V when he ascended the Throne of Madrid in 1700. During the events of the long War for the Spanish Succession, Philip – although winner of the war and for this reason real king of Spain – lost the viceroyalty of Naples and Sicily in favour of the Austrian Habsburgs, who kept it until 1734, the year when Charles of Bourbon – son of Philip V and his second wife Elisabeth Farnese – conquered the Neapolitan viceroyalty with the diplomatic help of his mother, became its king in every respect and restored the autonomy of the Kingdom of Naples by making it an independent and sovereign state.

The lily is the symbol of the Bourbon family

The facts that led to the proclamation of the Neapolitan Republic n. (Jan. 22, 1799) belong to the context of the Napoleonic campaign in Italy and the enthusiasm it generated in the democratic circles of the peninsula, which led to the Jacobin republics which were established between 1797 and 1799 in central-northern Italy and in Rome.

The French occupation of Rome (1798) is to be placed at the origin of the Neapolitan events. The Bourbon of Naples reacted to it: the court of Naples stipulated an alliance with Austria in 1798 and the Austrian general K. von Mack, who arrived in the capital at the request of Ferdinand IV, crossed the border of the kingdom with the Bourbon troops. 23 nov. 1798 and already on the 27th he was in Rome, where the king of Naples arrived two days later. But the French soon resumed the initiative and in mid-December they were again masters of Rome. The military reverse sowed panic among the Bourbons; on 21 Dec the king fled the city aboard an English ship that would take him to Sicily. In Naples remained a defeated army and a vicar of the king of limited capacity, Prince F. Pignatelli.

Since the early nineties of the eighteenth century, democratic circles of Jacobin and revolutionary inspiration were active in Naples; in agreement with these elements, the French general J.-E. Championnet prepared the coup d'état to take over Castel Sant’Elmo and thus facilitate the entry of his troops into the city. On 11 January, at the news of the truce stipulated by Pignatelli with the French, the bands of commoners who after the king's flight effectively controlled the city rose up in praise of the Holy Faith and St. Gennaro, and swearing death to the Jacobins. But Championnet was not intimidated; having secured control of Castel Sant’Elmo, where the patriots had penetrated on January 20, he shelled the city from the battlements of the fortress. The price of repression was very high: 3,000 commoners were killed. On the 23rd the French took control of the city, on the 24th they recognized the Republic and accepted its provisional government. At the head of the revolutionary junta was the most chosen component of the southern intelligentsia. The Constitution was drafted by Mario Pagano; the provisional government included, among others, V. Russo, C. Lauberg, G.M. Galanti, M. Delfico. Among his first acts there was the abolition of fidecommessi and primogeniture, while the problem of feudal property remained largely unanswered.

The Neapolitan Republic had a short life and struggled between financial difficulties and insurrectional outbreaks. Cardinal F. Ruffo, organized a popular army in Calabria, called the Holy Faith, spread the outbreaks of the anti-French insurrection throughout the Republic. The British, for their part, attempted an offensive from the sea, briefly occupying the island of Procida. In April, the worsening of the military situation in northern Italy following the Austro-Russian offensive forced the French to disengage from the southern regions. The Neapolitan patriots were left alone to face the enemy forces and on 13 June the Sanfedist army took over the city again, putting an end to the republican government. The repression was very severe: Eleonora Pimentel Fonseca (1752-99) was among the victims.

THE BIRTH OF THE KINGDOM OF THE TWO SICILIES

In 1860 the situation of the Kingdom of the Two Sicilies, in front of the other states of the peninsula, was the following, given its wealth and the number of its inhabitants:

Francesco Saverio Nitti,President of the Council of Ministers of the Kingdom of Italy,in its book “North and South” said that at the time of the introduction of the lira, from The Kingdom of the Two Sicilies were withdrawn 443. 3 million of various coinage coins, of which 424 million were silver coins, accounting for 65. 7% of all circulating coins in the italian peninsula.

The gold ducat of the two Sicilies. The coins of the kingdom were only made of metal: gold, silver and copper. 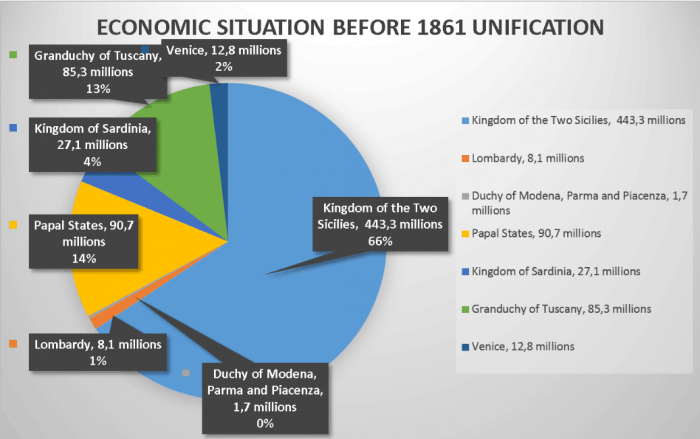 The wealth of each Italian kingdom before the Unification

THE PRIMACIES OF THE KINGDOM 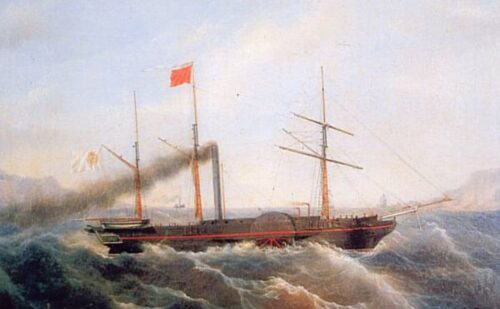 The Ferdinand I, the first steam ship in the Mediterranean. 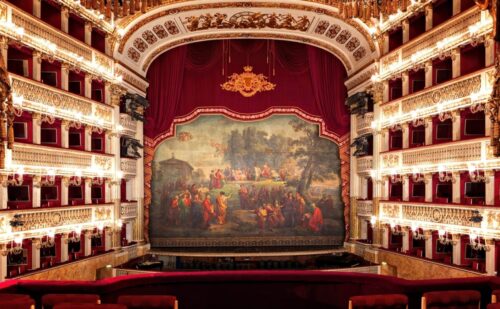 Desired by King Charles of Bourbon, the San Carlo Theatre in Naples it is the most imitated and also the oldest theatre in the world (active since 1737). It revolutionized the world theater architecture by introducing the horseshoe shape and balconies. Every theatre in the world with this shape was inspired by the San Carlo, also, for example, La Scala in Milan, the court theater at Versailles, or the Opera Royale in Paris. 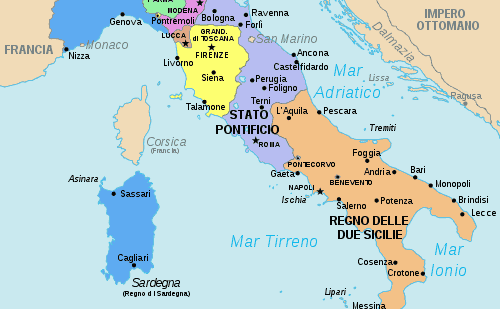 The Italian peninsula before the unification in 1861. Notice the diffeent states.

The "true" history of the unification of Italy

The current history of the Two Sicilies as we know it today, is strictly due to the post units italian historiography. There are two completely contradictory stories, one official and one supported today by more and more intellectuals.

For the official history of the italian official history school books, this Kingdom is described as culturally and economically underdeveloped, and governed in an abusive way by the Bourbon. On the old school books was not uncommon the use of an ironical and derogatory tone, and in many current italian dictionaries  the word “Bourbonic” stands for retrograde, backward. The unification history (simplifying) said that Garibaldi and his thousand men travelled Italy defeating all the dynasties, freeing the people from their oppressors and creating a united Italy.

Many intellectuals today describe this Kingdom as the third economic power of Europe, with Naples as the capital of European culture and innovation along with Paris and London. The Two Sicilies were annexed to the Kingdom of the dynasty Savoy after being invaded without any declaration of war. The Savoys, almost went in bankrupt, were supported by English Freemasonry, which provided men, military equipment and money (to be used to bribe the Bourbon generals), that helped them to invade the very rich Kingdom of the Two Sicilies, which at the time held 60% of all Italian wealth, and was made of gold and silver coins, not paper banknotes.

Obviously it is a very controversial story, never officially investigated.

Below you can read a common introduction to the italian unification typical of  history school books. In this case there is a description of the general economical conditions of the 1861 pre-unification italian Kingdoms. The first part talks about the northern italy, the highlighted part is the one dedicated to the Kingdom of the Two Sicilies, the remaining talks about the Kingdom of Sardinia. The highlighted part says:

“. . . Especially in Southern Italy the politics of the Bourbon, was expression of interests of the big landowners (so-called barons), and did little or nothing for the modernization of agriculture, and to boost manufacturing activities. Just think that in 1854 only 700. 000 ducats were spent for public works (roads, railways, ports, commercial ports), while military spending exceeded 13 million. “

Generally our official history books tells just this about the history of  the Two Sicilies, and also nothing about the cultural side.

Leading figures of the italian culture and society corroborate revisionist thesis about the Unification of Italy, and on the reputation of the Kingdom in general.

SPECIAL BY TG1 ABOUT THE 150TH ANNIVERSARY OF UNIFICATION. RAI TV

EUGENIO SCALFARI: “THE ITALIANS HATE THE STATE BECAUSE …” – REPUBBLICA TV

PAOLO MIELI (JOURNALIST): “ITALY HAS AN HISTORICAL DEBT WITH ITS SOUTH”

Documentary about the Kingdom

Journey to the Kingdom of the Two Sicilies. – Ulisse, by Alberto Angela. Rai Tv.

The Bourbons: Line of succession of the dynasty

Line of succession from the origins to today, with biographies of the rulers

Go to the line of succession
Don`t copy text!
We use cookies to personalize content and ads, provide social media features and analyze our traffic. We also share information about your use of our site with our web analytics, advertising and social media partners who may combine it with other information you have provided to them or that they have collected based on your use of theirs. services.CloseRead more