The 38km of the Carolino Acqueduct was built  to feed the Palace, the cities of Caserta and Naples, Carditello and all the farms of the area

The Carolino Acqueduct, named Carolino to honour the King Charles of Bourbon, a 38km lenght spectacular hydraulic engineering created by Luigi Vanvitelli, and it is certainly one of the most important public works carried out by the Bourbons. The Carolino Acqueduct was created to supply the Palace, the fountains, the new great city of Caserta that would be risen around, to enhance the water supply of Naples, to feed the Palace and the Farm of Carditello (the palace were pizza and spaghetti were born), to supply all the mills and the nearby agricultural activities near it. This demonstrates how much the Bourbons were a modern dynasty that, unlike other European dynasties, not spended huge sums to build an aqueduct with the only purpose of feeding the fountains of the royal park, but they wanted one that was useful to the people . 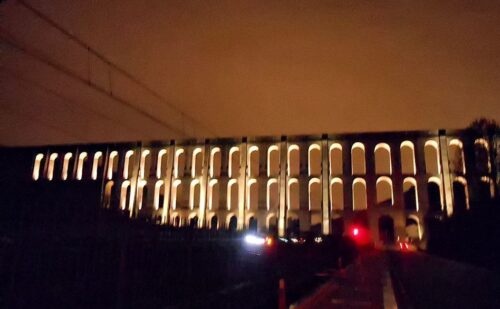 Starting from 1752, in the area of Airola (BN), at the bottom of the Taburno hill, at 254 meters above sea level, were identified numerous sources, all belonging to the Prince of Riccia, who donated them to the King. After King's approval, the construction of the Carolino Acqueduct started dividing the work into three parts:

The conduit, 1,2mX1,3m (WxH), and its lenght of 38 km, is almost entirely buried, except for the bridge, that is composed of 67 turrets and many arches, built in this way for to improve stability and for maintenance. The works began in 1753, and were completed in 1770 with a total cost of 622424 ducats, over 10.040.000€ of today. But we must emphasize the fact that today the construction costs are much higher, so today's real costs would be much higher.

The 38km lenght of the Carolino Acqueduct

One of the outer sections

The valley in winter