Home » The province of Caserta

Find out what to visit in Santa Maria Capua Vetere, the ancient Roman city of Capua, starting from the Spartacus amphitheater, the Mitreo, etc

Another wonder that absolutely must not be missed is the archaeological circuit of Santa Maria Capua Vetere, which boasts one of the oldest Roman amphitheaters and the second in order of magnitude, in fact only the Colosseum surpasses it. With its perfectly preserved basement and the annexed museums where it is possible to admire the finds from the amphitheater and the surrounding Samnite tombs, it is truly a sight not to be missed, also because it is precisely here that the ancient school of gladiators stood. which took place the famous revolt of Spartacus. Also worth visiting is the underground Mithraeum, a surprisingly well preserved place of worship of the God Mithras.

At the point where the small Oscan settlement of Volturnum stood, the Etruscans founded Capua (not to be confused with the city that today bears this name), which became the capital of a federation of cities, the so-called Campania dodecapolis. Passed under the dominion of the Samnites, during the fourth century the city even became - according to the Roman historian Tito Livio - the largest and richest in Italy. Relations between Capua and Rome experienced various crises, such as during the Second Punic War, when the first welcomed the Carthaginian leader Hannibal who, taking advantage of the wealth and prosperity of the city, spent there with his army the period of the proverbial "idleness of Capua ". Later the Romans severely punished the city for having passed over to the enemy's side, conquering it in 211 BC. and depriving it of any political and administrative autonomy Autonomy partially re-established only in the time of Caesar, who made it a colony later called by Augusto Colonia Julia Augusta Felix. From then until the fall of the empire, Capita remained the most important and richest city in southern Italy.

During late antiquity and the early Middle Ages, the position of Capua - once renowned for its healthiness - proved too vulnerable: devastated by the vandals of Genseric in 456, the city was destroyed again during a raid by the Saracens in 841. . The population gradually abandoned it in favor of a settlement of the same name, the current Capua, in a more perched and defensible place, protected by the bend of the river. On the site of the ancient city, around the church of S. Maria Maggiore (the current Cathedral), a small nucleus was formed which only in 1315 took the name of Santa Maria Maggiore and was designated as "Casale" di Capua. The current name of Santa Maria Capua Vetere was granted with Royal Decree n. 802 of 24 September 1863. From the moment of its foundation, marbles, sculptures, stones and other ancient pieces were transferred to the banks of the Volturno to build the palaces and churches of the New City.

The second in order of magnitude among these types of monuments in ancient Italy after the Colosseum, was built between the end of the 1st and the beginning of the 2nd century AD.

It was very popular for gladiator fights and, in fact, the ancient city of Capua became famous for the story of the rebel Spartacus.

After the destruction of the city in 841 AD by the Saracens, it was transformed into a fortress. Starting from the period of the Swabian domination, it became a quarry for the extraction of stone materials reused in the construction of buildings in the city and in the nearby modern Capua.

Go to the dedicated page

Museum of the Gladiators It collects the materials brought to light during the excavations carried out in the second half of the twentieth century in what was once the territory of Capua.

There are finds from the Bronze Age, a series of grave goods including bronzes and Etruscan ceramics from the Orientalizing, Archaic and Classical periods, in which Greek and Campania elements coexist. The Samnite domination relives through finds from the so-called painted tombs. A special room is dedicated to the centuries that go from the wars of Hannibal to the deduction of the colony by Caesar, which took place in 59 BC. The collections of terracotta and materials found in the sanctuary of Diana Tifatina and the Patturelli collection are also of considerable quality.

The museum also houses the resting Satyr from the Praxiteles school, discovered in the subsoil of Santa Maria Capua Vetere. It is a shrine dedicated to the cult of Mithras, an ancient divinity of Persian origin: it is one of the greatest examples of the rare Mithraic sanctuaries with pictorial decoration.

It is an underground temple dedicated to the god Mithras, whose cult, of oriental origin, spread in the imperial age throughout the Italian peninsula, especially among the soldiers of the Roman army.

Discovered in 1922, the Mitreo consists of an underground hall with benches for the faithful arranged on the long sides. The frescoes that decorate the room constitute the most complete cycle known on the cult of the divinity. The vault is decorated with six-pointed stars, while on the back wall there is a rare depiction of Mithras killing the bull, dating back to the 2nd century AD. The Arch of Hadrian

Along the Via Appia, along Corso Aldo Moro to the west, you will find the imposing arch of Hadrian, which once delimited the western border of the Roman city along the stretch of the Appia that headed towards Casilinum; today the monument is also called “arches of Capua”, and of the original brick construction only three pillars remain, two of which support an arch under which traffic flows. The Conocchia and the Old Prisons

These are the two best preserved Roman tombs in the whole territory.The first, recognizable on the right in a small garden, between houses and sheds, is the so-called Conocchia, already restored under King Ferdinand IV and formed by a quadrangular body with curved sides and corner turrets on which a drum rests. Ahead on the left are the Carceri Vecchie, the largest funerary building in the region, so called because of the popular belief that gladiators were imprisoned here. The mausoleum is divided into two overlapping cylindrical bodies (in the lower one, semi-columns alternate with niches), and is dominated by the nineteenth-century church of the Madonna della Libera.

The Civic and Italian Unification Museum

The Museum of the Italian Unification of Santa Maria Capua Vetere, set up in Piazza Angiulli in the former Augustinian convent, a building that also housed a juvenile prison, has one of the most important collections dedicated to the Italian Risorgimento in the South. The main nucleus of the collection is the result of research undertaken by Ernesto Papa, honorary inspector of monuments and excavations in Santa Maria Capua Vetere, who in 1910 sifted through, in search of relics, all the places where the actions of the battle had taken place. of the Volturno. The collection was exhibited for the first time in 1911 in the Principe di Napoli gallery, on the occasion of the fiftieth anniversary of the plebiscite which had decreed the annexation of the southern regions to the kingdom of Italy, and includes documents relating to the uprisings of 1821 and 1848, Bourbon weapons, autographed letters from Giuseppe Garibaldi, two combat flags of the Garibaldi army and a flag of the National Guard The church, dedicated to Santa Maria, has very ancient origins: founded in the fifth century by the bishop of Capua San Simmaco, it was enlarged in the eighth century with the addition of two external naves that were added to the original three. Other transformations took place in 1666 - with the addition of the current apse - and then in the 1700s and 1800s. Inside, the aisles, decorated in Baroque style, are supported by a forest of columns of different make, all coming from temples and monuments of the ancient city. The church boasts several noteworthy works of art, including a Renaissance ciborium in the chapel at the bottom of the right aisle, the wooden choir in the apse and, in the Conforto chapel, a panel depicting a Madonna and Child with Saints Francis and Symmachus. The center of Santa Maria Capua Vetere is ideally located in this square, characterized by a large garden and a fountain decorated with lions. According to tradition, this urban space would correspond to the ancient Seplasia agora, the most important square of the ancient city. A short stretch along via Mazzocchi leads to piazza Matteotti, where the Duomo stands. 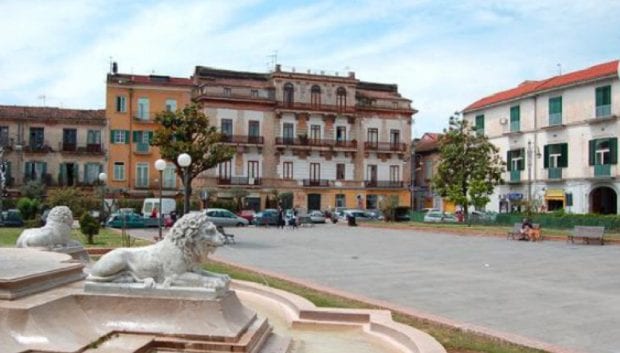 The theater saw its inauguration in the distant 1896 and thanks to its beauty, it was soon renamed ‘The little San Carlo’.

After the closure due to the earthquake of 1980, restoration works, in recent times, return it to its original splendor. Today the theater, the jewel of the city, represents the unforgettable stage for many events. Previous
Next
Don`t copy text!
We use cookies to personalize content and ads, provide social media features and analyze our traffic. We also share information about your use of our site with our web analytics, advertising and social media partners who may combine it with other information you have provided to them or that they have collected based on your use of theirs. services.CloseRead more