The Royal Palace of Caserta is the biggest in the world

“The Royal Palace, the crowning achievement of Luigi Vanvitelli, anticipated the external appearance of 18th century buildings whilst at the same time representing the swan song of the spectacular art of the Baroque, from which it adopted all the features needed to create the illusions of multidirectional space”

3D MODEL OF THE PALACE

Designed by Luigi Vanvitelli in 1752, the magniﬁcent Royal Palace of Caserta was created to be the core of a new capital city of the kingdom.

The Royal Palace of Caserta own a rectangular plan articulated on factory buildings, facing onto four large inner courtyards. A great portico (optical telescope) is the ideal connection with the park and the waterfall, located at the peak of the scenographic perspective escape thus created.

The great Staircase of Honour connects the lower and the upper floor, and so to the royal apartments. The rooms used by the royal family were redone many times during the century, to reach the so called “homogeneity of the interiors” typical of XVIII century architectural and decorative design,and partly with of the XIX century taste for composite furnishings and tiny objects.

On the upper vestibule in front of the Great Staircase of Honour, you can visit the Palatine Chapel; designed by Vanvitelli even in decorations, it’s certainly the room more than any other shows a clear analogy with the model of Versailles designed by Jules-Hardouin Mansart.

The Court Theatre, located on the western side of the palace, is a wonderful example of XVIII century theatre architecture.

The earliest project of the palace. Note that 4 towers and and the big dome that were never built.

Technical data of the Palace

The project of the palace

THE biggest SQUARE of italy

In 1806, the first one of the 10 years of French domination, Giuseppe Bonaparte decided that the traffic, always increasing, should no longer pass in front of the Palace and that the square was enclosed by a low wall. Therefore he let the Decurionate of the city (municipal council) know that he would have appreciated the construction, at the expense of the Municipality, of the elliptical road already planned by Vanvitelli.
The Decurionate accepted, despite the scarce financial resources, both because the French canceled the expensive taxes on the Caserta’ market, and because he asked, in return, that Caserta become the provincial capital (it will take place in 1818).
Years later, with the return of the Bourbons, King Ferdinand II even thought of enclosing the entire square in front of the Palace with an iron gate.
Therefore, Caserta, as it is today, was born because the gate was no longer built. In fact, if this had happened, the Royal Road to Capua (via Appia) would not have been extended to the piazza del Trivio (piazza Dante) and, consequently, the Corso, the bourgeois raod, the birthplace of most of the urban development of the city. 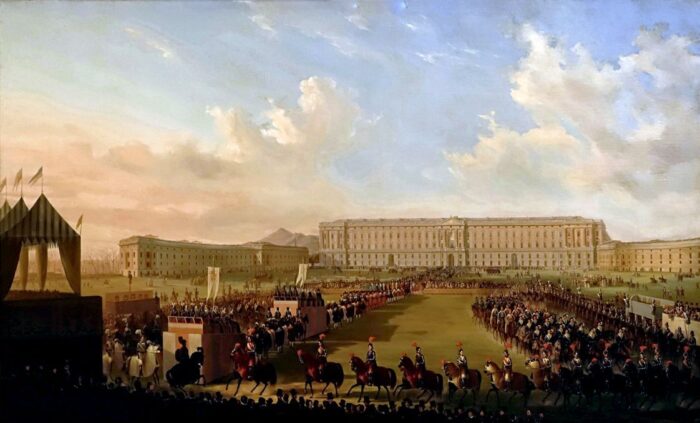 In the First hall of Murat, the Royal private apartments 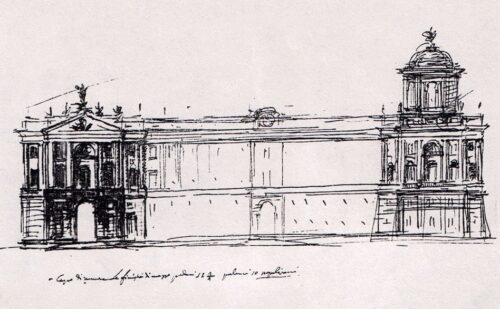 A sketch by Luigi Vanvitelli 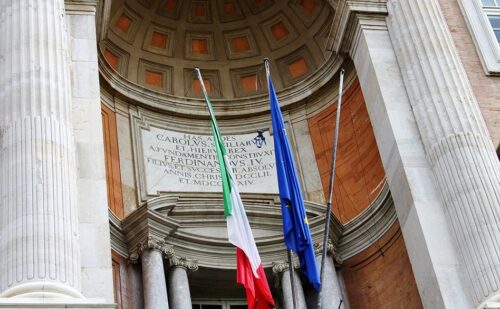 A stone in honor of the king Charles of Bourbon

More buildings into one