The Neoclassical as synthesis of three centuries of architecture

Inaugurated during the Christmas 1784 and bombed in 1943, the design of the Palatine Chapel of Caserta was inspired by that one of Versailles for the behest of the King, but Vanvitelli thanks to his genius created not just something of totally different, but managed to synthesize in it the Renaissance, Mannerist and Baroque tradition in the elegance of his neo-classicism.

On the main floor of the building, near the entrance to the Royal Apartments, you can find the Palatine Chapel, inaugurated in the presence of Ferdinand IV in Christmas 1784.

The Chapel was seriously damaged on the 27 August 1943 by the American bombing of the city of Caserta and the Royal Palace, that hit the Palatine Chapel, damaging the ceiling, columns and walls, destroying priceless works such as vestments, the two organs placed on both sides of the altar(where now you can see the curtains), and seven of the eight paintings of the Chapel. The paintings, all dedicated to the life of the Virgin, were placed one behind the altar, four on the balcony sides, three on the royal gallery:

After the war started an intense restoration of the Palatine Chapel to give back it to its original splendor, but due to the exhaustion of the bourbonic marble quarries , it required a long process of research in the antique market. In 1948 were restored the floor and the apse, the tabernacle of the altar, the balconies and the gilded stucco of the ceiling. Not all was restored, so that the scarred marbles can remember this story forever.

Among the surviving objects is this throne for Eucharistic exposition. Its imposing height of 125cm let us perceive the quality of the destroyed objects. 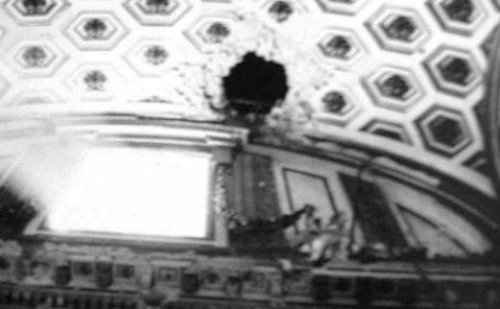 One of the many damages caused by the bombing. This bomb destroyed the paintings in the royal box 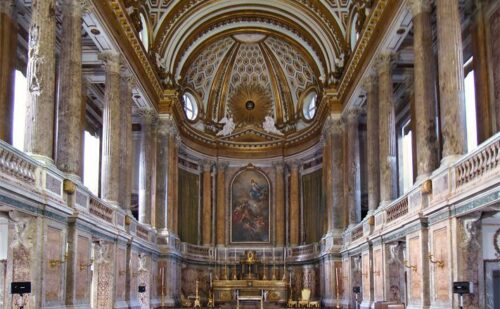 How it looked before the World War II. 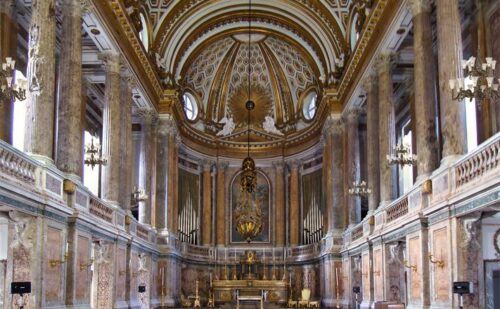 How maybe it would look today if it had not been bombed by the american troops.

In this movie recorded one year before the bombing, you can see all the things that were destroyed.

In the apse the altar in stucco is not the real one, but its original model, that was never built with marble. Similarly, the tabernacle made with pietre dure (amethyst, lapis lazuli, carnelian, agate and jasper) had not been completed, and instead of it there is one made of polychrome wood.

Under the altar it was scheduled an ancient marble urn decorated with gray agate and gilded bronzes, while the tabernacle was to be made up of precious stones: amethyst, lapis, petrified wood, carnelian, agate and jasper, decorated with gilded bronzes. The door of the tabernacle should have been made with lapis purchased as early as 1743, but it was later decided to use instead a big topaz purchased in Rome by Ferdinand I (maybe during his visit to the city in 1816), by Filippo Rega, cameo artist and director of the Royal Laboratory of pietra dura in Naples. Rega should have carved the topaz in the shape of a blessing Christ who rules the world, but could not complete it due to his death occurred in 1833.

The work for the tabernacle continued for many years, and when in 1845, for the VII International Congress of the Sciences, Ferdinand II ordered that the altar and the tabernacle were place in the Palatine Chapel, but the Director replied that in the Laboratory were missing both the project and the models, and that after many requests he received a model quite different from the first designed by Luigi Vanvitelli .

Therefore, the Director of the work of the Palace, the architect Gaetano Genovese, asked to the artist Enrico Maldarelli to prepare the project for the temporary altar, the one still present today. The six plates project, sent to the Laboratory only on November 12, 1845, showed at the bottom of the altar the white marble urn positioned after 1826, smaller than the one made of gray marble as wide as the altar that since 1826 is stored in the depot of the Palace. The white marble sarcophagus, however, was disliked by the King Ferdinand II, who, advised by the Genovese, asked to replace it with a decorative panel in pietra dura with  two angels made of white marble on both sides as designed by Luigi Vanvitelli.

The work of the tabernacle were stopped in 1784 and never resumes due to the Napoleonic domination of the Kingdom of the Two Sicilies. So now the altar and tabernacle of the Palatine Chapel, despite their exceptional manufacturing quality, are models. 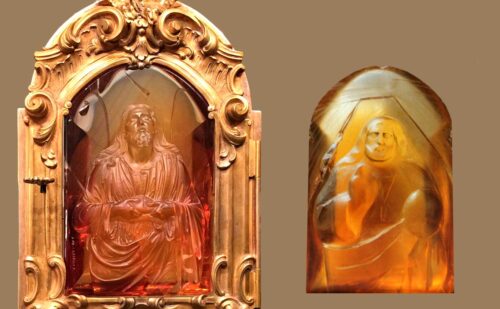 On the left it is the tabernacle of the Basilica of San Francesco di Paola in Naples, on the right the unfinished one for the Palatine Chapel of Caserta. Both are no longer the place to which they were intended. 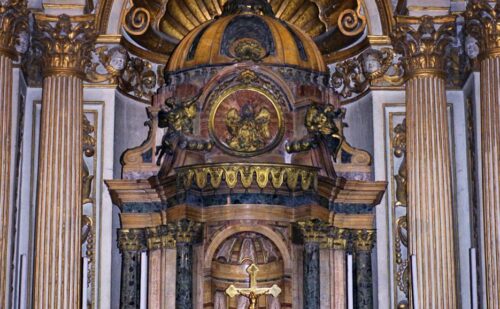 Altar of the chapel of SS. Sacrament into the Cathedral of Syracuse. 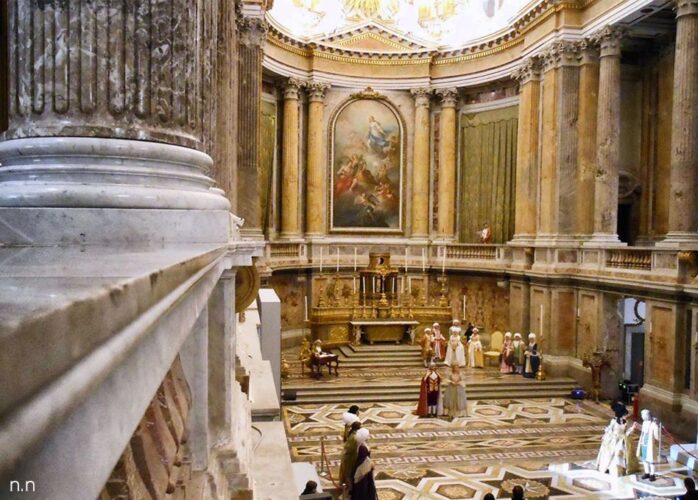 
The structure consists of a central nave with two side passages leading to the sacristy, where there is a museum of vestments. Above the side passages, there are columns on high pedestals supported by pillars, forming the balcony. On top of the balcony, there is an hidden passage: in fact the oval windows that you see from the Chapel are not external to the building, but they serve as like as a filter for two other series of windows outside used to increase the illumination, and that are only visible entering in this hidden passage. So Vanvitelli increased the illumination without augmenting the size of the oval windows.

Above the entrance in front of the apse, there is the Royal Tribune. It is made with yellow Castronuovo marble columns and panels in Mondragone marble, and can be accessed via a circular staircase placed on the right side of the entrance. The ceiling is barrel-shaped with coffers(sunken panels), and the floor is made of fine polychrome marbles, with a composition that is reminiscent of the ceiling.

The rich and complex decoration of a refined neoclassical style, is the result of masterful skill of Vanvitelli to summarize in a single work all the Renaissance, Mannerist and Baroque tradition as festoons, oval windows or coffered ceiling, often used by Vanvitelli inside the whole the Palace, but that look different every time depending by the place where are located, due to different decorations and lighting.

S. Conca was charges by the Bourbons, surely as suggested by Vanvitelli, and together with Mengs and Bonito, to create the paintings for the Royal Tribune. And Conca, according to the Letters written by Vanvitelli, despite being eighty years old, he completed the work with a so excellent results that the two young sovereigns, Ferdinand IV and Maria Carolina of Habsburg, appreciated him infinitely.

Apparently similar to the Royal Chapel of Versailles, the Palatine Chapel of Caserta is instead very different from the one of Versailles although initially it was takes as model. Vanvitelli, in fact, changed the side galleries, replacing the first row of arches with architrave, and the upper horseshoe continuous colonnade with an apse without a gallery lying behind.

According to what Vanvitelli wrote in his Letters, was the King to force him to follow the model of the Chapel of Versailles (made by the earlier French architect Jules Hardouin-Mansart):

"... My Chapel of Caserta certainly will be the best work, and that one of Versailles has been so poorly designed, it is completely out of proportion, so filled with gilded bronzes, that is absolutely a bad work. Was not the Chapel of Versailles that forced me to do the horseshoe gallery around: this was an order of the King, who desired to keep an eye on the court during the courting and the hand-kissings. Which is the source of these Lords? Plus I've simplified everything for comfort and for a good symmetry of architecture, and let's try to find these comforts elsewhere... " 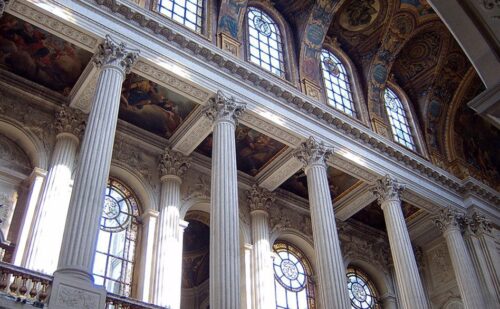 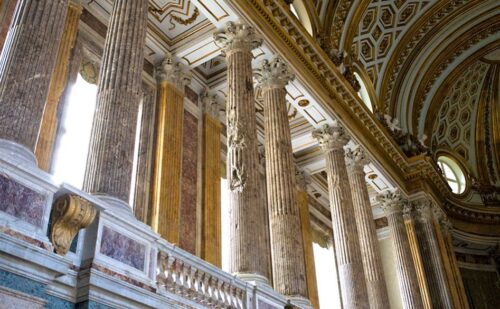 So would seem that, while for the design of the Park the influence of the French model is undeniable, Vanvitelli, clearly irritated, wants to make clear that he never desired to make a replica of the Royal Chapel of Versailles - that even seems to despise - underlining that idea of the horseshoe balcony is the result only of the order of King. However Vanvitelli gave up soon to the solution of the horseshoe balcony to create, as written in the Declaration, a completely different structure that of Versailles retains just the rectangular shape with an apse. 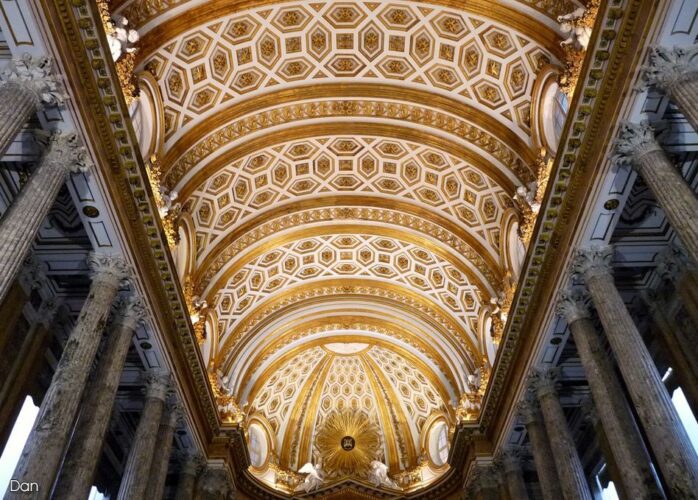 Analysis of the project


In the comparison between the design drawings of the Declaration and its realization, the floor plan of the original project remained almost the same in shape but was changed in the proportions. In fact, for example, the plant is less wide but deeper, and the part of the ceiling in the apse has a very different structure. 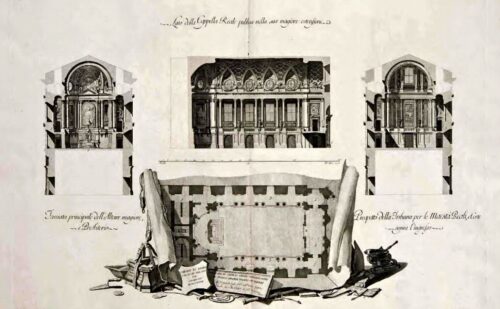 The project by Vanvitelli 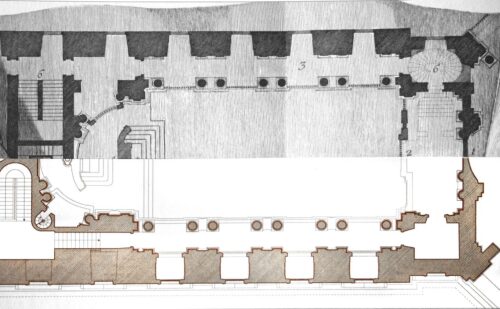 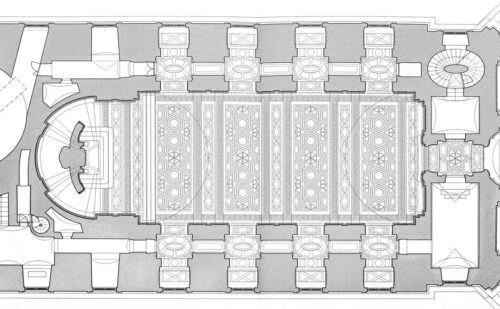 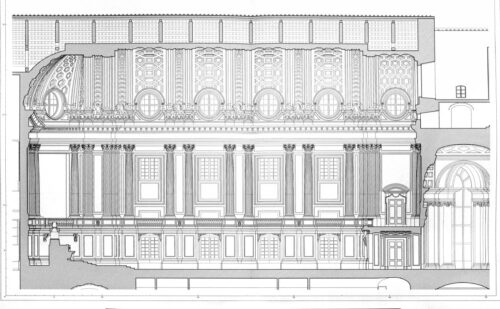 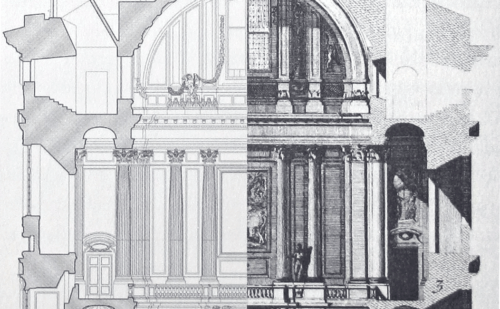 The Royal Tribune. The modern relief / The project by Vanvitelli

Notice the third level with the two rows of windows not visible from the Chapel. 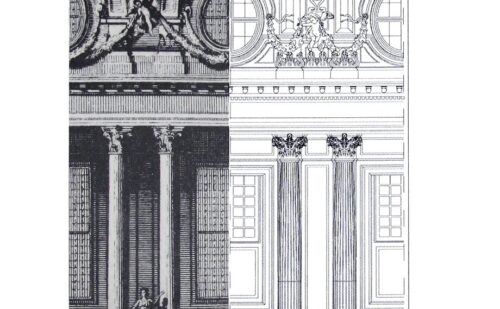 In the project you can see statues between the twin columns, but they were never sculpted. Note the difference in height and in the decoration of barrel vaults, clearly changed during the construction.