THE STAIRCASE OF ROYAL THE PALACE OF CASERTA

The role model of all the world most beautiful staircases, designed by Luigi Vanvitelli

The Staircase of the Royal Palace of Caserta is such a masterpiece of architecture and scenography, which became the role model of all the main following world staircases. As you climbing up in the large entry staircase, while you looking at the great marble lions, you will be impressed by the immensity of the great background wall with its three big statues of the Royal Majesty, Merit and Truth. Turn back and suddenly you will see the Staircase expanding into two huge and spectacular parallel staircases ending with a structure of arches and columns that resembles a temple. Only now you can admire the majesty of the Staircase, 32m high and 11,664m3 volume, that ends up with a dome that originally housed an invisible orchestra. This dome is “fake” indeed, because above it there is another one suspended from the roof truss via wooden tie rods. This dome is an extraordinary masterpiece of fantasy, art, technique and constructive audacity, and we can only imagine all the difficulties encountered and masterfully overcome by Vanvitelli.
While you will climb up via the side staircase you can admire all this, and so you will get into the large central vestibule, almost a temple, from which you can enter the Chapel and the Royal Apartments.
The magnificence of the Staircase, with its marbles, huge statues, elegant arches, the two huge stairs, is the most spectacular scenography of the 18th century.

The upper rectangular landing is dominated on the sides by two marble lions meaning that, as deduced from Vanvitelli’s “Declaration of Drawings”, the strength of reason and weapons that assure the king of “ownership of his kingdoms”. The right lion is by Tommaso Solari, while the one on the left is by Paolo Persico.

At the end of the staircase we find the immense back wall. It is divided into three main sections dominated by three huge sculptures. The three huge statues were commissioned by Vanvitelli to intimidate visitors during the climb. They represent Merit, Royal Majesty and Truth.

(più grande è il (greater is the merit, greater will be the reward)

The light from the large side windows collects in the immense vault which in turn reflects it downwards. The vault was painted by Gerolamo Starace and represents “The palace of Apollo”, and has a central oculus, as above it there is a space for the orchestra that played when the King climbed the Staircase. 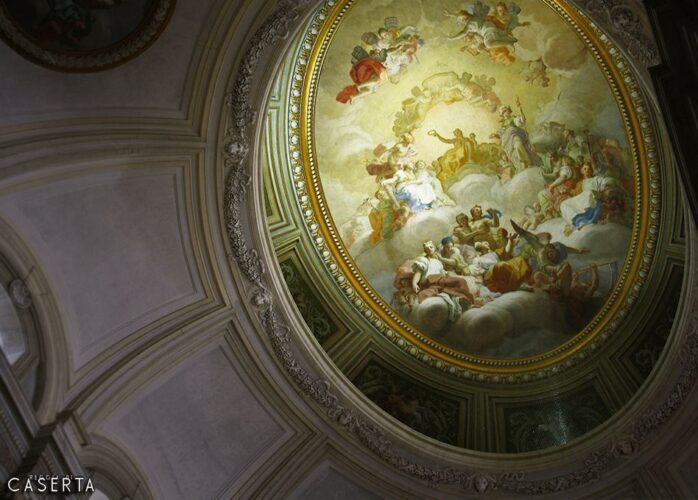 It is difficult to determine where the Staircase ends and the Upper Vestibule begins, there are no doors or gates that clearly separate the external space (the Telescope) from the interior of the Palace. the upper vestibule can therefore be considered as the last portion of the external space before entering the Royal Apartments or the Palatine Chapel.

Perfectly octagonal in shape, it is surrounded by a portico, this evokes later ancient architecture. 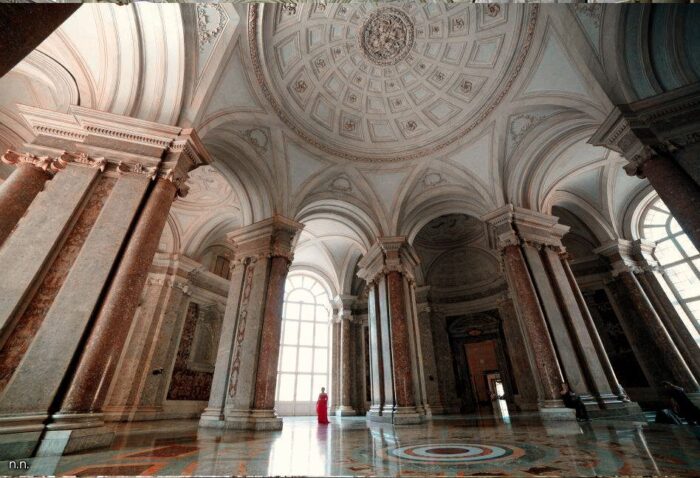 GREAT WORLD STAIRCASES INSPIRED BY THE ONE AT CASERTA 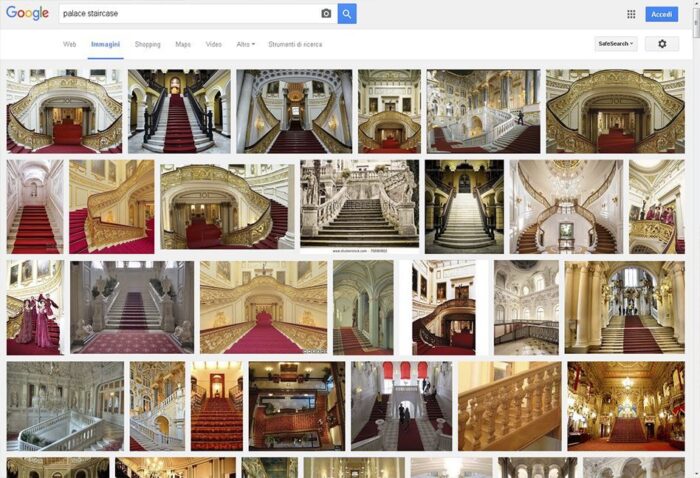 The Palace in the movies

The RoyalPalace has been always used as a location for the cinema.