The leading Theatre. One of its first copies was the Royal Opera in Versailles.

The Court Theatre in Caserta was born at the behest of the king, and its architecture was inspired by the revolutionary Teatro di San Carlo in Naples. It was one of the first theaters with an horseshoe shape, which allow to achieve a better acoustics and visibility, but unlike the San Carlo, of which it takes just its shape, the internal structure is totally different, and in some ways even better. The Court Theatre was used by the sovereign for private executions of the shows of the Neapolitan theater.

The Court Theatre in the Royal Palace of Caserta, scale reproduction of the San Carlo in Naples, is splendid example of theater architecture of the nineteenth century, and was the only room in the palace entirely built under the guidance of Vanvitelli, although, to reach its completion, he had to overcome to relevant technical and financial difficulties.

Reading the documents related to the vault, we learn that Vanvitelli desired to made in the Park a large public theater directly connected to the Royal Palace. King Charles, due to the enormous European success of his San Carlo in Naples, decided to build the theater inside the building, not externally, so in March 1752 the architect was forced to change the project including it inside the Palace. So Vanvitelli decided to:

"... I will build a little theater inside the palace for domestic comedies; I will put this in the darkest place, because it doesn’t need light and this is just the right solution for me. "

The Court Theatre was not planned in the original design of the building, you can’t find any information about it, nor in the first Vanvitelli’s preparatory drawings, nor in the plates inside the first edition of the Declaration, in fact its construction began in 1756, three years after the start of work for the Royal Palace. The decoration took much longer than expected, because the architect was simultaneously overseeing the construction of the Palace of Caserta, the Carolino Aqueduct and other buildings in Milan and Benevento. The vanvitellian Theatre still have a late baroque style, although at the era of construction the debate about the theaters was very lively from the Italian and French Enlightenment followers.
The construction was completed in 1768, and it was opened in the carnival of the 1769 by the young royal couple, Ferdinand and Maria Carolina, in the presence of all the Neapolitan nobility, and until 1798, it owned a full events calendar, ranging from dance parties, to theater comedies, concerts and dramas.
A remarkable collection of opera librettos (kept in the Palatine Library located in the Royal Apartments), testify the love for the music of both sovereigns, and this was demonstrated by the fact that most of the shows of the Teatro San Carlo in Naples were continually replicated the Royal Palace at Caserta.

The Court Theatre of the Royal Palace of Caserta is an exact reproduction, in smaller scale, of the Teatro San Carlo in Naples. Both theaters revolutionized the theater architecture, as they were the first theaters in the world to have an horseshoe shape.

This structure, defined as Italian Style theater - it would be more exact to call it as Neapolitan Style theater - quickly became the worldwide standard for all new theaters, and decreed the abandonment of the classical rectangular shape with bleachers.
The horseshoe theater was created in boxes to suit different needs:

The theater is located into the western part of the palace, and has four entrances: one reserved for the king and the court, two lateral ones with spiral staircases for the public, and another for artists and technical machinery, located behind the stage, directly connected with the outside of the palace.
The Court Theatre has a horseshoe shape, and it is as high as the first two floors of the building, measuring 12 meters in length and 12m in width, and has 41 boxes arranged in five rows, the last of which is located just below the turn, and a Royal box.
Gaetano Magri decorated the balconies with cherubs, wreaths of leaves, flowers and shells. Each balcony has a different decoration than the one next to it, but it is the same to that one on the other side of the theater.

The plaster work and the gilding to the stucco cornice were made by Gennaro Amodìo and Pietro Ferdecchini, while the papier-mache artists Gaetano Navarro, Nicola Ciliento e Francesco Bonfantini, executed in 1768 the composite order capitals of the columns, and statues of Orpheus and Amphion placed in niches on both side of the proscenium.

Comparison between the original project and the modern relief. 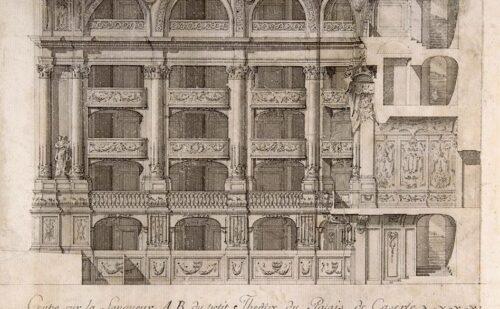 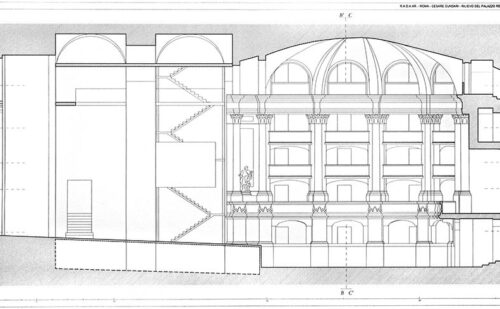 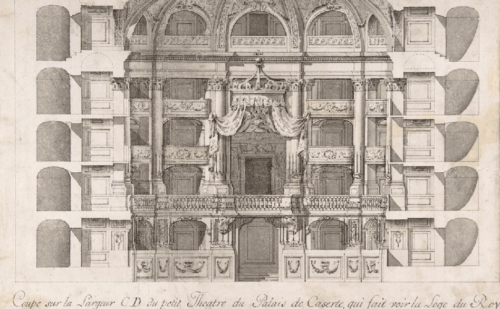 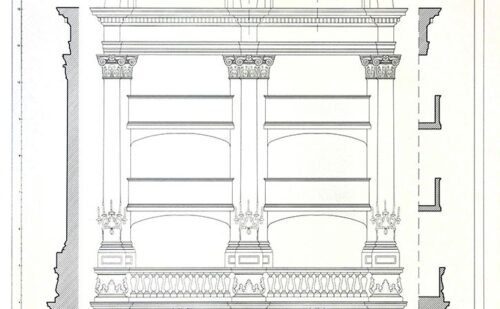 As said above, the Court Theatre was inspired by the San Carlo in Naples, but this reference is limited to only to its shape, because the space layout is absolutely innovative, both in terms of:

The ceiling is divided into segments delimited by the ribs that supports the vault;
Unlike other European theaters, such as Drottningholm and Versailles, where the theater is separated building outside the palace, the Court Theatre of Caserta is perfectly integrated within the building, despite the entrance is isolated. After going through some hallways, you will find the central box reserved for the king and the court: the sudden transition from a narrow hallway to the royal box, where suddenly the view expands over the entire theater, generates a sudden and striking emotion. The impression you get by visiting the theater, with its warm colors accentuated by the soft lights of the huge central chandelier, is that one of a luxurious but intimate environment, almost like a "cave".