Terrae Motus: homage to Lucio Amelio “The magic of the ’80s” 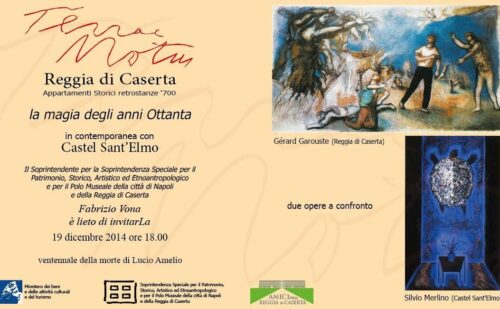 On friday, December 19 at 18, the twentieth anniversary of the death of Lucio Amelio, will be exceptionally exposed an artwork made by Gerard Garouste from the Terrae Motus collection. It was made by the parisian artist with various techniques on canvas paper that currently is not permanently exposed in the Royal Palace of Caserta for preservation due to the delicacy of the materials used to createit. The artwork will be publically exposed at the same time in a videoconference with the exhibition on the ’80s edited by Angela Tecce in Castel Sant’ Elmo in Naples.

Lucio Amelio expanded the history of contemporary art in Campania with a memorable contribution with his thirty years old career and especially with the creation of the Terrae Motus collection. The theme of the earthquake happened on the 23 November 1980 in Irpinia, developed by international artists being invited by Amelio, has expanded the meaning of the word “collection”, creating a comparison between generations, styles, languages, techniques in the political perspective of a redemption from the social and moral destruction caused by the earthquake.

On December 19, visitors will be greeted by the voice of Amelio who plays classical Neapolitan songs and during the evening are scheduled performances of contemporary dance and theatrical monologues of the actors of the Wojtyla Theater. The exhibition is edited by Vincenzo Mazzarella and Antonella Cucciniello and is produced with the assistance of the Association “Amici della Reggia”.