San Silvestro: take a leap into the nature and history

At the height of the village of Puccianiello, the Carolino Aqueduct enters inside the San Silvestro Oasis, a 100 hectares estate, bought by Charles of Bourbon (1715-1788) and expanded and rearranged to make it suitable for hunting, cultivation of vineyards and olive trees, breeding of sheeps and the production of fine cheeses.

In an area called Parito, between 1797 and 1801, was built a shooting-lodge for the king and his entourage. The building, constructed under the direction of Francesco Collecini, architect of Belvedere di San Leucio, develops according to a plan in open court towards the valley. From the garden, still organized according to Renaissance style, a series of terraced gardens connects this building to the surrounding area, dominated in the distance by the hugeness of the Palace. An area of about eight hectares was planted in front of the building, and it was a large rectangular vineyard called San Silvestro Oasis.

Since February 1993, this area has become a WWF oasis. In 2000, the Oasis has been included in S.I.C. (Sites of Community Importance). Since 1994 it is open to the public, who can visit, for a fee, assisted by WWF’s guides.

The property is now the home of the Visitor Center with a small Museum of Natural del Bosco, the Screening Room and Conference, the underground cellar for Exhibitions, two small rooms Catering, the Meeting Room, Point Catering and the Laboratories of honey and wax. 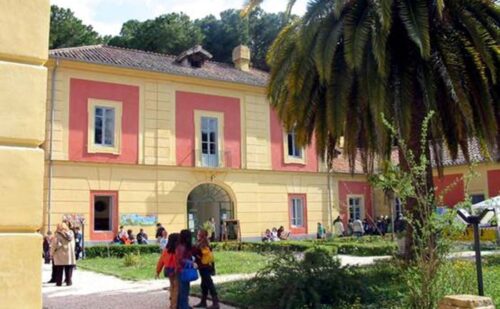 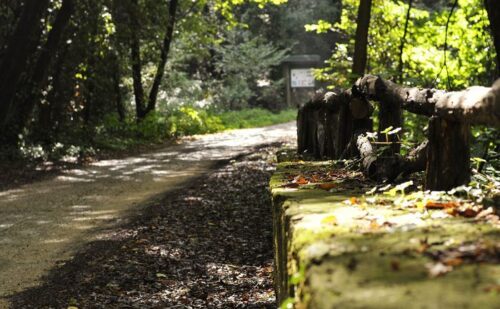 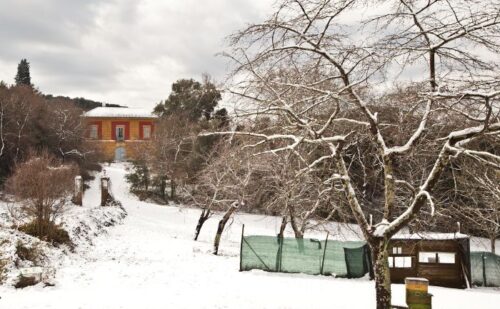 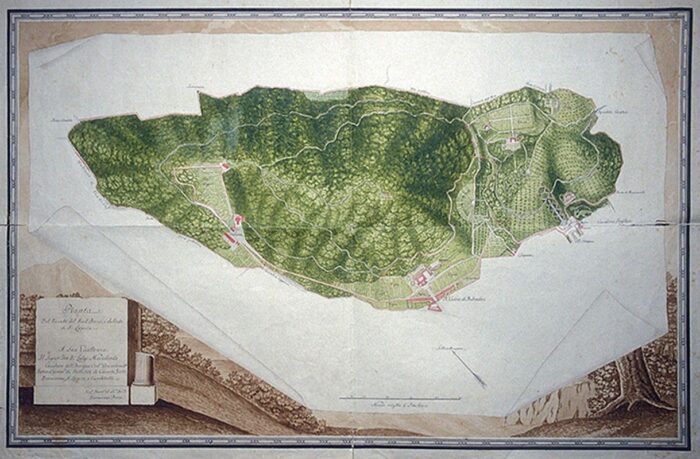 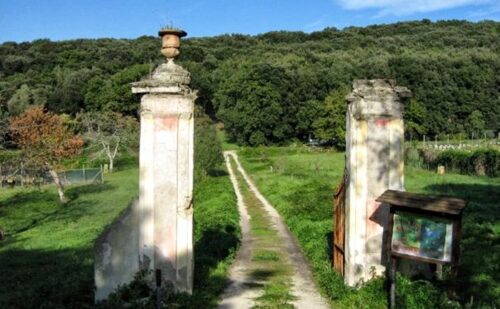 In the courtyard in front of the steps of the Casino di S. Silvestro has been recovered recently in the work of the bourbonic orchard restoration has taken care to replant, to the extent possible, the same species, such as citrus fruits, apricots, figs , apple and so on. which provided much of the fruit at the table of the King. 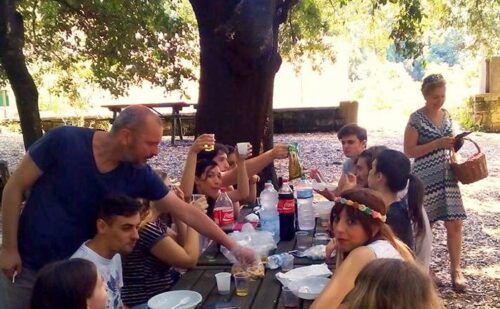 Pic-Nic area Almost adjacent to the shooting-lodge, in the shade of oak trees has been equipped with the Area Picnic tables and benches for a capacity of about 150 seats. The area is particularly popular especially during the warmer months for the freshness and sense of freedom it offers to users. 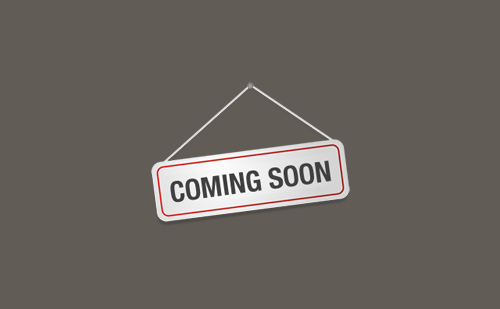 Once you fold Bourbon called "Pecoreria"(sheep's house), was recovered by a restoration funded by the 3M-Italy and has become a functional shelter with 24 beds, kitchen, dining room with fireplace, bathrooms, showers and heating.

Former House Arch, so named for the presence of just one arch at the entrance, was the home of a settler and storage networks for migratory birds. With recovered materials and techniques of green building is equipped with solar panels, photovoltaic cells, heating with fireplace and with a system of rainwater collection.

Dwelling of the guardian of the forest area next to the entrance gate, now is also the point of reception of visitors, school groups and guests staying in the guesthouse.

There are many routes to meet every kind of visitor's interests. 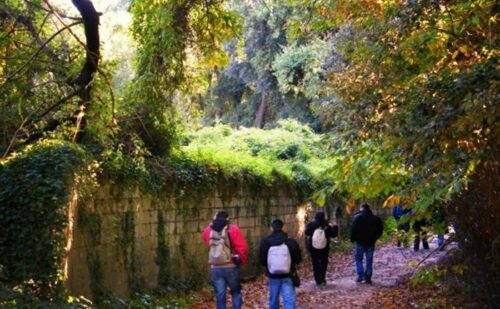 It 'an easy interactive itinerary lasting about two hours, which winds through the woods, passing through the garden of ferns, the area of the tortoises, the educational pond, butterfly garden, aviaries, the pond turtle and the museum of the foreSan This course is recommended for students or groups who are visiting for the first time.

On the route of the Bees 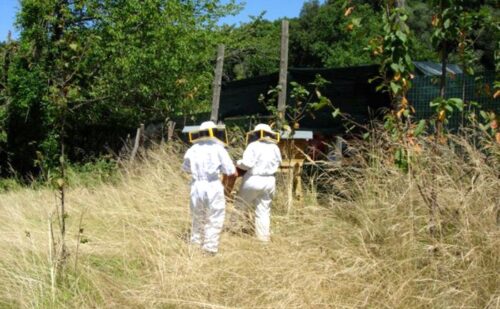 The route is aimed at knowledge, even through simulation games, life of bees, their organization and of the important functions they play in nature. A part of the route workshop takes place in the classroom teaching pool, and then go into the projection room and the lab where you taste the honey from the comb and directly participates in the manufacture of wax objects.

Colors, scents and sounds from the nature 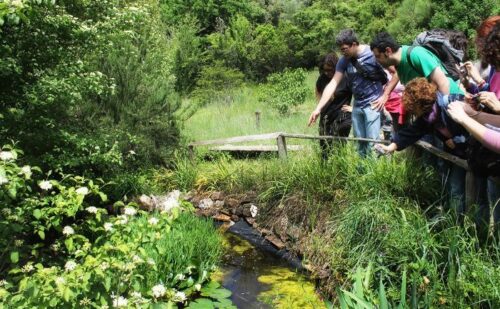 The path comes from the belief that environmental education should be taught to feel ... understand ... and act properly. Participants become familiar with the environment and forest with its elements through emotional activities induced by the first of smell and touch, and then with cognitive activities using all the senses.

It 'a quiet walk lasting about 2.30 hours, which allows you to trace the history of the place, and in particular of agricultural activities, recreational hunting through the testimony of artifacts and works by the Bourbons.

The mathematics of insects 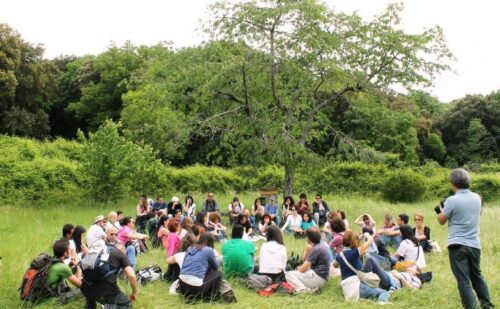 This way, more suitable for students of a higher order, which depicts in nature for millions of years, are adopted behaviors and construction techniques and mathematical models satisfying a set ergonometric efficiency and energy saving models that man has learned only with the discovery of the infinitesimal calculus.

Energy and Recycling in nature 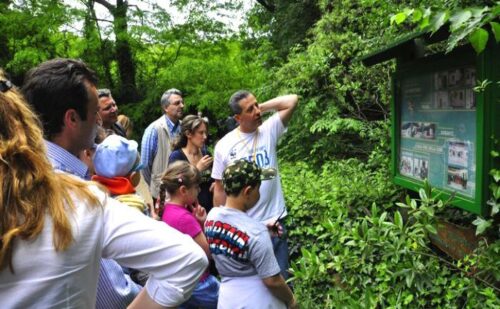 It 'a course of study that emphasizes the production and use of energy in nature, closed loops, and the recycling and renewable energy sources that we can use .Complete tour ends with a visit to the Casa Ecologica equipped with photovoltaic cells, panels solar thermal chimney, rainwater collection and built with green building materials.

"The Forest Fairy" or The Bioluminescence 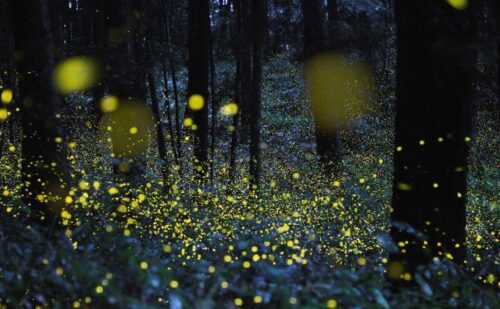 Route dedicated to observation of fireflies that in the period from May to June, numerous, light the wood making it "magical and enchanted." At the end of the observation in the field, we are witnessing the projection of a video in order to understand the significance of the phenomenon in nature and understand how chemical energy is transformed into light energy with maximum efficiency.

Observation of bats and listening to the "voices" with the "bat-detector", which converts ultrasound into audible sounds. Screening of a video to learn about their behavior, dispel fears and myths and discover that mammals are equipped with sonar, formidable natural insecticides that do not pollute and do not create resistance.

Evenings under the stars 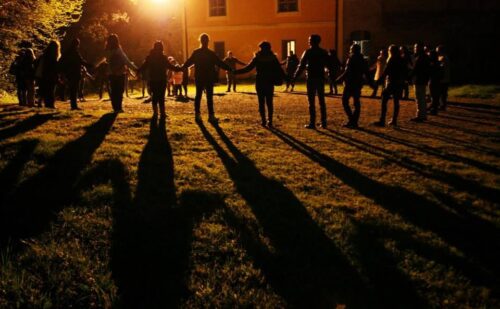 Night Tours topics dedicated to the observation of the constellations, planets and the moon in the first quarter, visits that are repeated in different seasons of the year. In these evenings the projection and the explanations of the experts on the field preceding the observation that takes place with the aid of telescopes.