The Parterre and the Old Woods: minimal appearance, but full of hidden treasures.

The parterre is the wide clearing you meet going out of the Palace main gallery. Its name comes from the French expression "par terre", that means "on the ground", since it had been designed following the French garden designs, with ﬂowers representing fantastic weaves similar to coloured flower carpets. Vanvitelli could count on the cooperation of the French head gardener Martin Biancour. Because of a change in the design during the works, the ﬂower beds described in the original design had been replaced by wide grasslands still present nowadays. In the middle of each flowerbed, in the ﬁrst half of the XIX century, circular bushes of live oaks and laurels were planted to feed pheasants.

The parterre is crossed by a net of streets disposed in a radiant scheme. The perimeter is delimited by groves of holm oaks, linden trees and hornbeams, cut up to the height of ten meters. Above, the foliage is left free to grow without preﬁxed forms. The effect is a sort of continuous “green wall", only interrupted by openings left in correspondence to the tracks. At the back there is a semicircle where 16 little niches hosts white marble busts for decorative purposes.  These statues are called “terminuses” because of their function to delimit the various areas of the Park.

On the left side of the parterre there is the Old Woods, already existed before of the building of the Park. It was a garden of the residence of a noble family of Caserta, the Acquavivas, ancestors of the Caetani di Sermoneta who sold the land to King Carlo for building the Royal Palace of Caserta.

The Old Woods had been realized between the end of XVI and the ﬁrst decades of the XVII century by the princes Giulio Antonio (1578-1589) and Andrea Matteo Acquaviva (1594-1634). ln order to respect the naturalistic environment, Vanvitelli decided not to change radically the structure, he had just  thickened the vegetation (holm oaks. ivy and ruscus). The original use was also preserved, since the place was used as a sort of “secret garden” for the amusement and rest of the sovereign and the court. 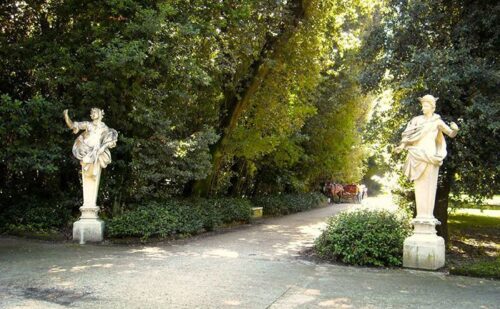 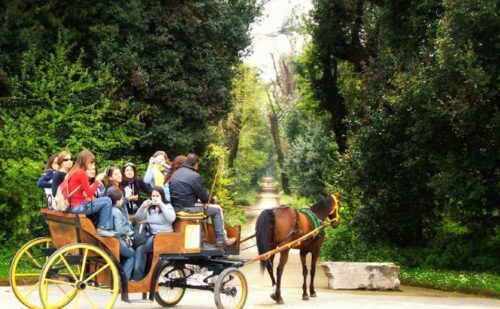 The Castelluccia (the Little Castle)

The Wood hides the Castelluccia, a little tower with an octagonal plan surrounded by a ditch. lt had been built on a previous structure dating back to the time of the Acquavivas, and in 1769 it was modified for the entertainment of the young king Ferdinand IV.
Up to 1773, it was the scenery of fake battles. So it was equipped with a bastion, watchtowers and military buildings, little barracks, guard places and demilunes.

After 1818, it once more became a lodge, assuming the current sober and elegant appearance. The rear part is equipped with a little formal garden with ﬂowers, bushes, citrus trees and creepers. The area nearby shows wonderful specimens of exotic plants: magnolias, araucarias, palms. ln the area on the north of the Old Wood, in the middle of a wide clearing, there is the Great Fishpond, a wide basin with an elliptical form. It was made in 1769, contemporarily to the Castelluccia, and is the second entertainment architecture of the Park, also used for playing false naval combats. 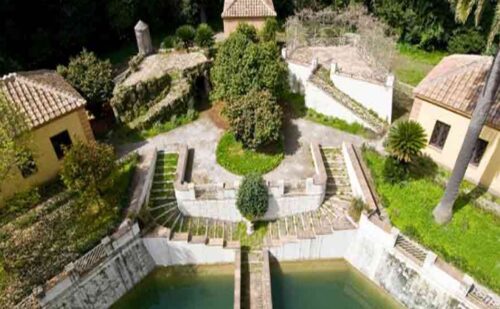 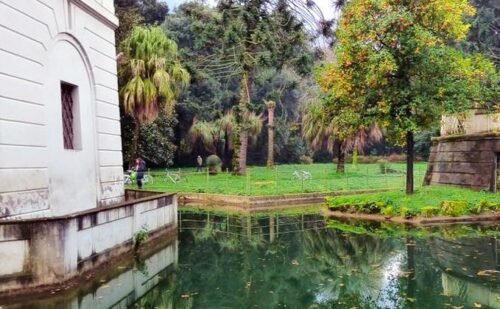 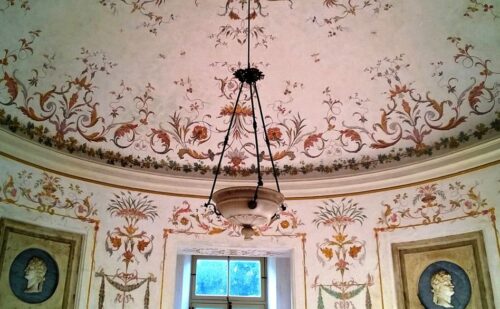 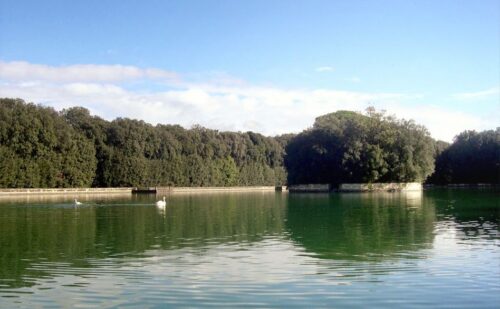