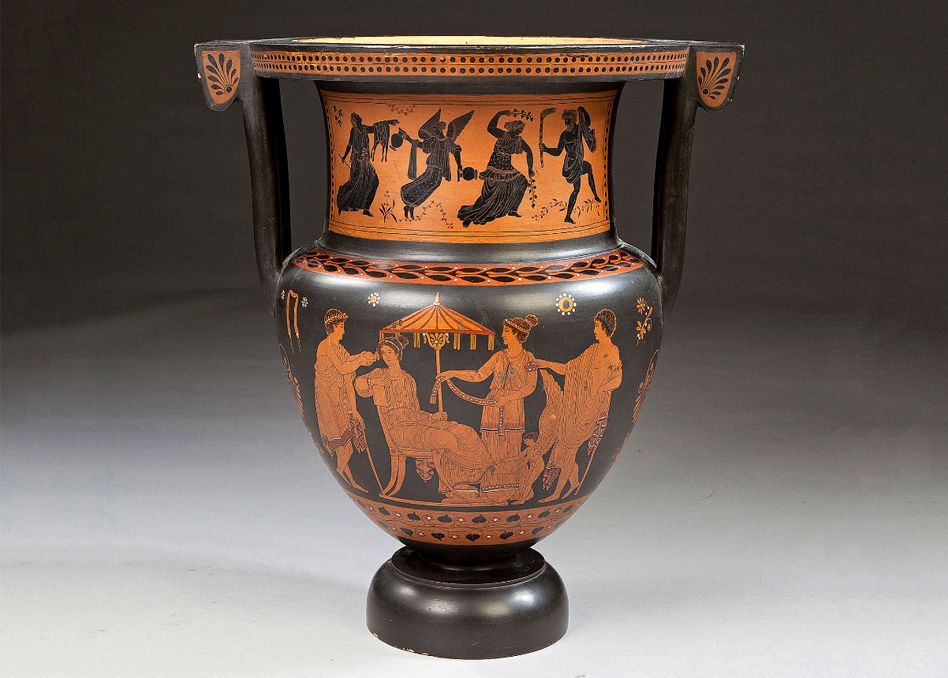 The Manufacture Giustiniani descends from the ceramic tradition of Cerreto Sannita, in the province of Benevento (near Caserta). Founded in Naples in 1760 by Nicola Giustiniani of Cerreto, in the early days produced cream-colored pottery and majolica, decorated with enamel colors, as well as beautiful tiles in majolica (eg those on the floor of the chapel of S. Maria dei Miracles in the church of the nuns of Jesus in Naples). Business prospered under the direction of Biagio Giustiniani, nephew of the founder, at the beginning of the 19th century. (Especially after the closure of the Royal Porcelain manufacture of Naples in 1821), with the production of a lovely tableware, statuettes of costume characters, busts of full size, garden statues, flower boxes,  reproductions of ancient statues, etc . However, the factory is particularly well-known for the beautiful copies of classic vases and the adaptations that their forms and ornaments were made for certain pieces such as, for example, The great "Etruscan" table service, today in the Duca of Martina  musum  in Naples. (The De Vecchio factory produced similar copies of classical vases.)

A variety of porcelain was produced since 1829, but in 1848, shortly after the death of Biagio Giustiniani, the factory declared bankruptcy and the pieces in stock were sold. Two children, however, continued to operate in smaller sizes until Michele Giustiniani, founder of the founder, rebuilt the company at first with his uncle and then from 1870 on his own. Under his direction, the factory produced a wide variety of ornamental and decorative objects, including some imitations of Renaissance majolica, and his pieces received several awards in international exhibitions. From a business point of view, however, the firm went to a new bankruptcy because of the excessive expansion of production, and had to close shortly after 1885. The "Giustiniani" inscription on the pieces was the main trademark.