Gold is the symbol of the sun and of the power. 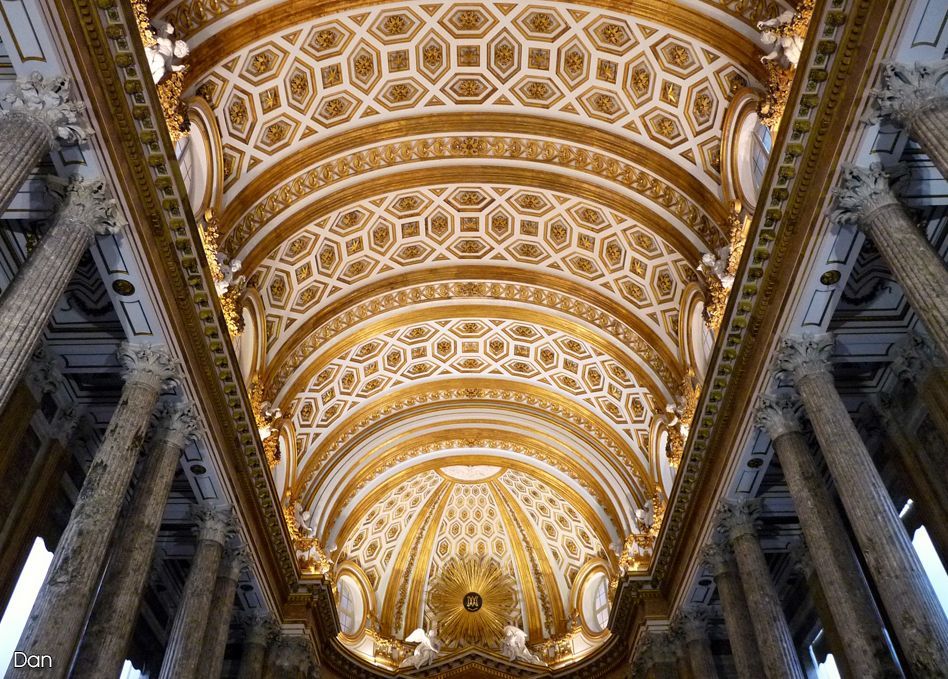 Ceiling of the Palatine Chapel

The gold, thanks to its luxuriousness and sheen that is able to give to any objects, has always been the most widely used metal for decoration, and so there are many ways to use it.

How do you distinguish the gildings

How you can distinguish a genuine gold plating from a false one;a gilding mission by a gouache? Obviously you need a lot of attention and experience, but we can say that: 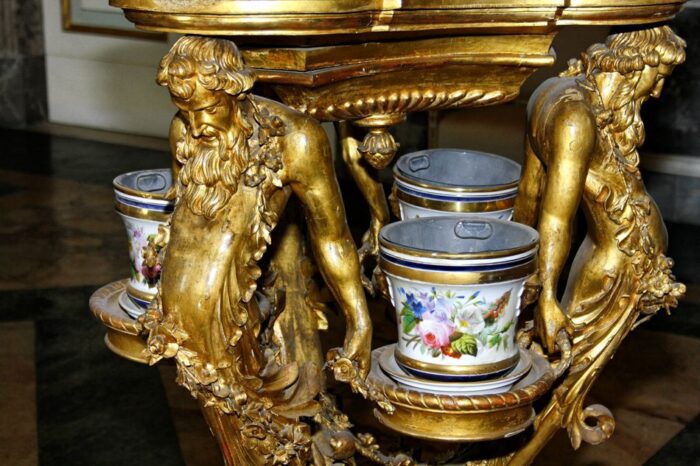 This is the most difficult process, but it provides the best results. The same procedure is adopted also for the imitiation gold leaf, silver or aluminum. The following procedure is the same as the old one, with the only difference that now the gold is no more hand-hammered into thin layers, but it is industrially made. 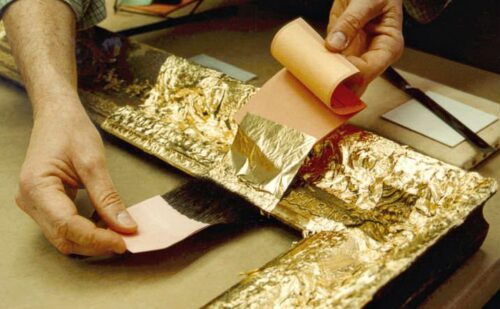 Due to the light transparency of the gold leaf, the color of the underlying bolus changes the tinge. In fact, to recognize the origin of a furniture, it is also useful to observe if the tinge of the surface is more yellowish or reddish. Generally if it is reddish probably comes from Italy or northern Europe, if yellowish comes from France or England.

All that is gilded in the Royal Palace has been prepared with the hand-wrought gold, whether it be furniture, picture frames or ceilings.

The procedure is the same of the gold leaf, but instead of the foil type is requires the gold dust dissolved in gum arabic. It is painted with a brush and then polished with agate stone.

Cover the part to be gilded with an adhesive (the mission) and after drop the gold dust, that will adhere only where desired.

Prepare a mixture of chalk, glue and gold dust to be used in very thick layers.

Cover the surface to be gilded with a special adhesive paint (called mission). When it is almost dry, but still sticky, leans over the leaf, and stick it via pressing it with a cotton ball or with an extremely clean brush. When finished, if you want to get an antiquing effect apply the same procedure used for the gold leaf gilding. The gilding mission in regard to the gold leaf can't be burnished with agate stone, and so it is less shiny, but because it is much easyer to apply, it is very useful especially for extremely sculpted baroque furnitures.

Method created in the Sevres porcelain factory in 1750. It consists of a mixture of honey with gold dust, and was used to gild small objects and porcelain. It is fixed via a low-temperature cooking. The finish is always opaque, but the higher is the temperature, more opaque it will become.

The birth of the fire gilding focus is controversial: maybe born in the fourth century b.c in Greece, but became common only in the Roman Empire; around the II-III century a.d in appeared in China during the IV-III century b.c.

It is used almost exclusively for the gold plating of the metals, but sometimes also for porcelain, especially during the Empire style period (1800-1840).

This process is very harmful to health due to toxic fumes of mercury and is now almost obsolete; was rather popular in the eighteenth century to gild bronzes that decorated the furniture Louis XV (Rococo), Louis XVI(Neoclassical) and Empire(later Neoclassical), but due to the premature death of many gilders, it began to be replaced since 1860 with the new galvanic gilding.

Industrial method created around the middle of 1700, and used mainly for the porcelain. The color is placed on a matrix and then engraved on a suitable sheet. This sheet then is pressed on, for example, a plate, and the drawing is transferred. It is used both with the colors or gold. It easy to be recognized, because are clearly noticeable the joint of the two sides of the sheet. At the end of 1800 it evolved in lithographic printing. It has no artistic value.

The electroplating is a method used almost exclusively to give a better appearance to metal, covering it with a more noble metals such as, for example, gold, silver, platinum, rhodium, nickel, chromium, or to coat the inside of silver tableware objects. It is an electrochemical process in which, by inserting in a liquid (plating bath) both the metal to be plated that the noble metal (so used as negative and positive poles), and with electricity, the metal that serves as a positive pole lose its particles that are deposited onto the other metal. Being an industrial process it has no artistic value, and if the gilding of an ancient object is restored using this procedure, it loses much of its value.

The galvanic gilding was invented in Italy in 1802 by Luigi Valentino Brugnatelli at the University of Pavia, using the galvanic cell just invented by Alessandro Volta.