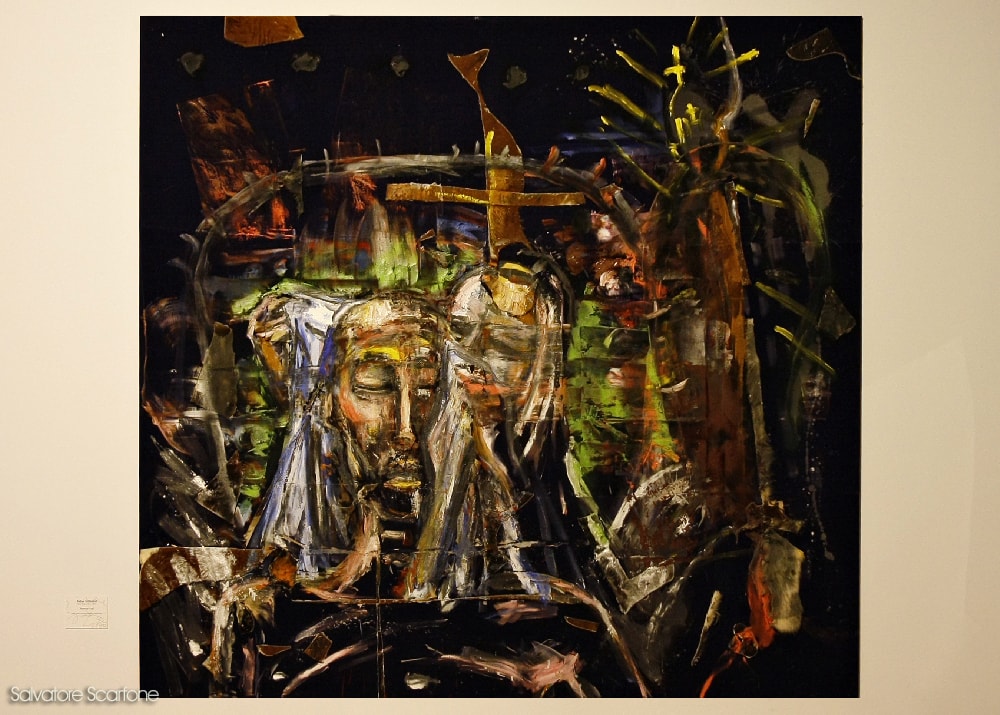 This artwork is part of the Terrae Motus Collection

“Destruction is the key to building something new.” Construction and destruction are radically linked together. Many of my paintings seem to have been shredded or seem like fragments of something. In particular, Mexican paintings on a pot suggest an earthquake: the lava flowing through a mountain village, the vases in the lava, fossilized. It’s a tremendous psychological drama, a land violence, the same spirit that holds many of my paintings. Looking at them, you have the impression that a a bomb exploded, and this act of breaking is something alive … This picture, in particular, resembles someone who was injured and cared for. It could even vaguely be titled Christ in the Gulf of Naples, also if my intention was not this, although the picture was very explicit, I did not want it to be like a comic. “ 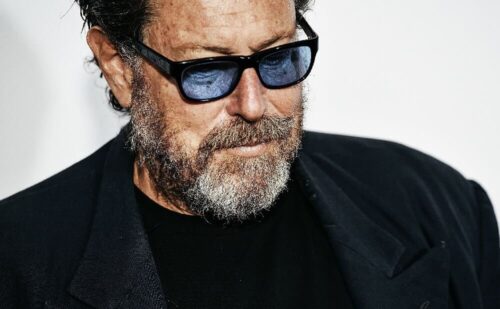 Born in Brooklyn by a jewish family, Schnabel is one of New York’s most famous painters, well-known for his large-size canvases (often made with mixed techniques), portraits and design work. He lives in a large home-studio designed by himself according to his own concept of art, known as Chupì Palace, on the 11th street in the West Village.

Schnabel began his film career in the 1990s with the film Basquiat, a biopic on the painter Jean-Michel Basquiat (1996), followed by Before Night Falls (2000), an adaptation of Reinaldo Arenas’ autobiographical novel, which he also produced, which won the Grand Jury Prize at the Venice Film Festival. He directed The Diving Bell and the Butterfly (2007), an adaptation (with a screenplay by Ronald Harwood) of a French memoir by Jean-Dominique Bauby. The Diving Bell and the Butterfly earned him the award for best director at the 2007 Cannes Film Festival,[1] the Golden Globe for best director, the Independent Spirit Award for best director, and a nomination for the Academy Award for Best Director. Schnabel, who designed Lou Reed’s critically acclaimed ‘Berlin’ Tour in 2007, also released ‘Berlin the Movie’.[9]

Despite the fact that producing The Diving Bell and the Butterfly might seem like a commission to do someone else’s work, Schnabel took on the film. According to Schnabel,

I used to go up to read to Fred Hughes, Andy Warhol’s business partner, who had multiple sclerosis. And as Fred got worse, he ended up locked inside his body. I had been thinking that I might make a movie about Fred when his nurse, Darren McCormick, gave me Bauby’s memoir, The Diving Bell and the Butterfly. Then, in 2003, when my father was dying, the script arrived from Kennedy. So it didn’t feel quite like taking on a commissioned job.

In May 2017, it was reported that Schnabel would return to directing movies. Schnabel announced that he will direct a film about painter, Vincent Van Gogh during time in Arles and Auvers-sur-Oise, France. The film is called At Eternity’s Gate and script was written by Schnabel and famed French screenwriter, Jean-Claude Carrière. Schnabel said, “This is a film about painting and a painter, and their relationship to infinity. It is told by a painter. It contains what I felt were essential moments in his life, this is not the official history — it’s my version. One that I hope could make you closer to him.” Schnabel said he was struck by the painter’s “commitment to something that did not have an audience, or an audience that he was probably never going to meet. When Van Gogh looked at the beauty of nature through painting, it brought him further away from everybody and made it impossible for him to have a real life. The film will shed light on that.” The film will adopt a first-person point of view, as the isolated Van Gogh wanders the countryside, wishing a few people would commune with him like a normal person. Schnabel wants the movie to “exist outside of time,” he said. “There are moments in the script and film where he understands that nobody is going to understand him. He doesn’t care if people understand him. He just wants to be able to paint. For the longest time he was trying to help people and show people something they couldn’t see. That’s a tall order. He also realized he was going to leave something here.” Schnabel also stated that he didn’t like any of the 36 films about Van Gogh’s life. “I don’t think they get it,” he said. “Maybe I have to be a painter to be able to do this film, that’s probably why I’m doing it. I see it the way I make a painting or a work of art.” The filmmaker wants At Eternity’s Gate to make the moviegoer “feel not like you are watching Vincent Van Gogh, but you are living his life,” he said. “We’re not trying to address his whole life story. It’s really about understanding what painting is, what the different language is that is not the same. It’s a painted world, a different way of communicating.” Willem Dafoe will play Van Gogh.[10] In September 2017, it’s been reported that Oscar Isaac and Emmanuelle Seigner, who co-starred in Schnabel’s The Diving Bell and the Butterfly will be part of the cast.

Married first to Jacqueline Beaurang, the two had three children, Lola Montes, Stella Madrid and Vito Maria. Once divorced, Schnabel married Olatz López Garmendia, with whom he had Cy and Olmo twins. From 2007 until June 2011 he lived with the Italian-Palestinian journalist and writer Rula Jebreal.

His distinctive peculiar style consists in dressing up with elegant pajamas, both singles and under jackets and coats.

Neo-expressionism is a style of late modernist or early-postmodern painting and sculpture that emerged in the late 1970s. Neo-expressionists were sometimes called Neue Wilden (‘The new wild ones’; ‘New Fauves’ would better meet the meaning of the term). It is characterized by intense subjectivity and rough handling of materials.

Neo-expressionism developed as a reaction against conceptual art and minimal art of the 1970s. Neo-expressionists returned to portraying recognizable objects, such as the human body (although sometimes in an abstract manner), in a rough and violently emotional way, often using vivid colors. It was overtly inspired by German Expressionist painters, such as Emil Nolde, Max Beckmann, George Grosz, Ernst Ludwig Kirchner, James Ensor and Edvard Munch. It is also related to American Lyrical Abstraction painting of the 1960s and 1970s, The Hairy Who movement in Chicago, the Bay Area Figurative School of the 1950s and 1960s, the continuation of Abstract Expressionism, New Image Painting and precedents in Pop Painting

This website uses cookies to improve your experience while you navigate through the website. Out of these, the cookies that are categorized as necessary are stored on your browser as they are essential for the working of basic functionalities of the website. We also use third-party cookies that help us analyze and understand how you use this website. These cookies will be stored in your browser only with your consent. You also have the option to opt-out of these cookies. But opting out of some of these cookies may affect your browsing experience.
SAVE & ACCEPT
Don`t copy text!
Scroll to Top